Darjeeling, Dec. 11: The Janmukti Asthai Karmachari Sangathan today apologised for alleged slogans raised against two GTA executive sabha members by some workers at a procession here two days back after the Gorkha Janmukti Morcha had expressed its displeasure over the verbal attack on the party leaders.

The Sangathan, an association of GTA casual employees owing allegiance to the Morcha, however, refrained from offering apology for its leaders lashing out at the party and the hill body at the march here on Wednesday. The association had held the procession and a meeting to demand the immediate regularisation of the jobs of over 5,000 casual employees at the GTA.

Deepak Sharma, the spokesman for the Sangathan, today issued a written apology. "The workers who have been facing administrative discrimination right from the days of the (erstwhile) Darjeeling Gorkha Hill Council to the Gorkhaland Territorial Administration had organised a rally-cum-public meeting on December 9 to demand the regularisation of their jobs. In the process, the party (Morcha) leadership has claimed that members of the JAKS raised 'murdabad' slogans against Roshan Giri, GTA Sabha member in charge of education, and Binay Tamang, GTA Sabha member in charge of personnel and administration department, during the rally."

"Since the party (Morcha) leadership has expressed grievances against the alleged sloganeering, the JAKS in principle accepts the charge and expresses apology," the statement in Nepali reads.

Asked if such slogans had indeed been raised at the rally, Sharma said: "We did not hear any slogan against the two leaders but in the course of the rally, some might have raised it. That is why we have accepted the allegation in principle and accepted it." 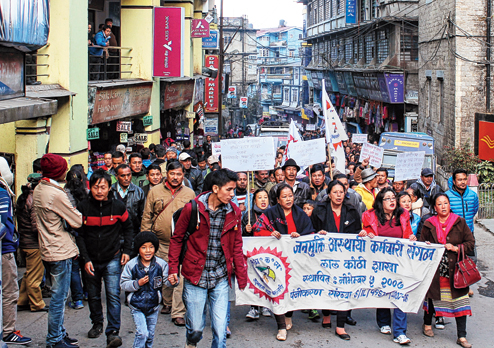