The agitation comes at a time Gorkha Janmukti Morcha president Bimal Gurung is attempting to hijack the district demand issue.

Today, around 70 people assembled near Trikone Park in town as Amir Chhetri, a member of the committee's youth wing, released a 13-point charter demanding jobs, roads and water supply among others. "We would appeal to all those affected to come forward and lend their voices," he said.

Asked if the dharna was in response to Gurung's attempt to hijack the district cause and take credit, Sandip Rai, another youth wing member, said: "Along with Kalimpong, the Morcha had also demanded more districts, like Kurseong and Terai-Mirik. If the state was paying heed to the Morcha, it would have surely considered the party's demand for other districts as well. We know following whose demand the process has been initiated."

Kalimpong MLA Chhetri took up the district issue with the state after he quit the Morcha in September. Earlier this month, sources in Nabanna had said a proposal to create Kalimpong district would be put forward at a state cabinet meeting on December 18.

Yesterday, Gurung had said in a written statement: "On December 18, soon after the state cabinet approves the formation of a Kalimpong district, the Gorkha Janmukti Morcha will organise celebration rallies throughout Kalimpong.

There has been no assurance, however, that a decision would be taken that day.

The committee has also demanded land rights for cinchona and tea workers and forest dwellers, job regularisation and panchayat polls among others. Three demands, however, are targeted to hurt the Morcha. "The party, which issued a diktat asking people not to pay electricity bills during (statehood) agitation is silent ... No one knows what happened about the inclusion of 398 mouzas from the Dooars... What plans does GTA have for development of Kalimpong?...," asked a committee member .

The Morcha had asked hill people not to pay power bills between April 2008 and July 2011. Residents, however, are getting bills with the dues.

Kumar Chamling, the Morcha's Kalimpong branch secretary, said: "I have not gone through the details. But we were the first to raise the district demand. When the district is formed, we will celebrate." 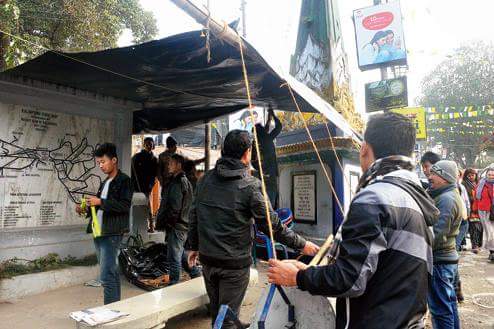