Dec. 10: The 12-hour strike called by the Darjeeling, Terai Dooars Plantation Labour Union and the Progressive Tea Workers' Union today demanding the reopening of Panighata Tea Estate in the Terai and other closed Dooars gardens was total across the hills and near total in the Dooars.

Today, two workers of Panighata garden in Mirik block, around 35km from Siliguri, died. The garden has been shut since October 10.

In Darjeeling and the Dooars, private transport remained off the roads and shops and markets, most educational institutions, banks and private establishments were closed. Government offices were open and attendance was normal.

All tea gardens in the hills were shut but those in the Dooars were open as they were kept out of the strike's purview.

Bimal Gurung, the chief of the Gorkha Janmukti Morcha that backs the Darjeeling Terai Dooars Plantation Labour Union, issued a press release saying the shutdown was successful. "Thank you people for the overwhelming support for general strike called by the Darjeeling Terai Dooars Plantation Labour Union in Darjeeling and Dooars against the distressed condition of Panighata tea garden and other 20 tea gardens in the Dooars," it read. "From the hills of Darjeeling to Jaigaon (on the India-Bhutan border in Alipurduar), everything remained shut..."

The Morcha union had called the strike in the hills. Later, the PTWU joined the agitation and extended its purview to the plains as well.

In the Dooars, bandh supporters picketed Banarhat and Lakkhipara and blocked NH31C. Few government buses ran today. In the morning, some strike supporters blocked the main road to Bhutan in Jaigaon. The protest was withdrawn after police arrival.

"The state is not taking any initiative to see that the estates of the Duncans Goenka Group function properly and the closed tea estates reopen," John Barla, the PTWU president, said. "It (the strike) turned out to be a success."

Unlike the tea strike called by the Joint Forum, a common platform of 24 tea trade unions, on December 1 which was partial, today's strike proved that the Morcha and Barla still have considerable clout in the Dooars. "It is a fresh concern for Trinamul and other political parties," an observer said.

Sourav Chakraborty, the Trinamul president of Jalpaiguri and Alipurduar districts, said: "The state is putting in the best efforts to provide relief to tea workers and their families in the Duncans Group estates and the closed gardens. The state is sincerely trying to reopen the shut gardens. The strike affected the regular life and economy of the Dooars."

In Darjeeling, Prashant Pradhan, the assistant secretary of the Morcha union, said: "Tomorrow, we will review the strike. If situation remains unchanged in the Dooars and Panighata, we might go for an indefinite hunger strike and a 72-hour general strike."

Yesterday, the state labour department had called meetings with the unions and the Panighata management but no one from the management turned up.

The workers from Panighata who died today are Purna Prasad Chhetri, 50, and Leela Rai, 52. "Purna was weak and died in his home without treatment. Leela had a heart ailment and died at a hospital," Harihar Acharya, the Terai committee president of the Morcha union, said. 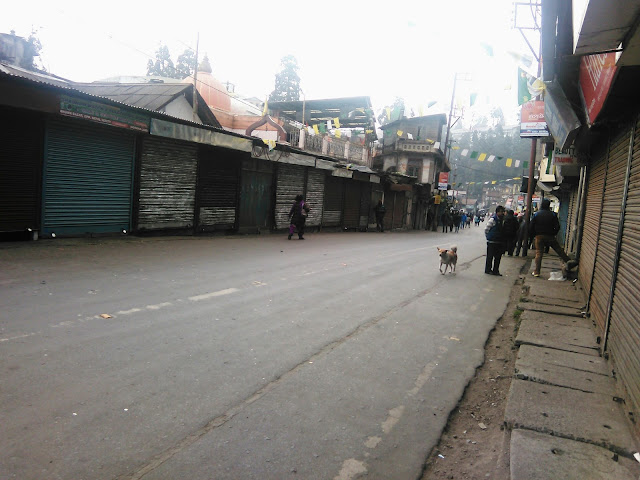