India is known to have produced numerous talented boxers who have made a mark at the global stage. From the great Hawa Singh in the 1960s to the likes of Mary Kom, Akhil Kumar and Vijender Singh, these athletes have made the nation proud on several occasions. In this edition of Heroes of Combat Sports, we take a look at the journey of the country’s youngest Olympian, 21-year-old Shiva Thapa.

The young boxer has already grown into a mature athlete and will be one of India’s strongest contenders at the 2016 Olympics.

Born on 8th December 1993, in Guwahati, Shiva Thapa is the youngest of six children. His father, Padam Thapa was a Karate instructor at Assam and his elder brother Gobind Thapa was a National level boxing champion. Gobind Thapa has won numerous accolades including National Medals and Best Boxer Awards in various competitions. At a very young age, Shiva Thapa had taken a liking towards boxing and used to watch Mike Tyson’s bouts with great interest.

As Shiva Thapa managed his studies and training comfortably, Olympic Gold Quest (OGQ), a non-profit organization, which boosts Indian sporting talent, identified him as an enormous talent. The organization went on to make him a part of their ‘Vision 2016’ initiative. Former Indian hockeycaptain Viren Rasquinha had high regard for Thapa at the time of his association with OGQ and stated how a talented boxer like him needed proper grooming.

In 2008, Shiva Thapa participated at the Children of Asia. International Sports Games in Moscow and won the bronze medal. This achievement earned him a place in the Indian contingent that was travelling to Armenia for the Junior World Boxing Championships. Thapa won a bronze medal in the 52-kg weight category and was the only Indian medal-winner.

String of silver medals in 2010

After a semifinal loss at  the Asian Youth Boxing Championship, Shiva Thapa entered the finals of the Youth World    Amateur Boxing Championships. An injured fist in the semifinal bout cost him the match and he had to be content with the silver medal. Post this success, Shiva Thapa qualified for the Youth Olympics and had a good run in the tournament with a bronze medal finish in the 54-kg category.

The 2012 Asian Olympic Qualifiers were held in Astana, Kazakhstan, where Shiva Thapa defeated Syria’s Wessam Salamana 18–11 to clinch the gold medal. The result saw him qualify for the 2012 London Olympics in 56-kg category. He, however, lost in the first round of the London Olympics, losing 9–14 to Oscar Valdez Fierro of Mexico in the Bantamweight category.

WSB contract for Shiva Thapa in 2013

In July 2013, Shiva emerged victorious at the Asian Confederation Boxing Championships. He became the youngest Indian to achieve this feat. He also participated in the World Boxing Championships of the same year and went on to reach the quarterfinals in his debut stint. As he continued to grow in stature as a boxer, the World Series Boxing offered Shiva Thapa a contract for professional boxing. He became one of the first Indian boxers to receive the contract. Currently, Shiva Thapa is world no. 3 in the Bantamweight category as per the AIBA rankings.

Thapa is also an active promoter of social causes and participates in marathons and walkathons intended to raise funds for charity. We wish the young boxer from Assam all the very best for his next big mission: the 2016 Olympics. 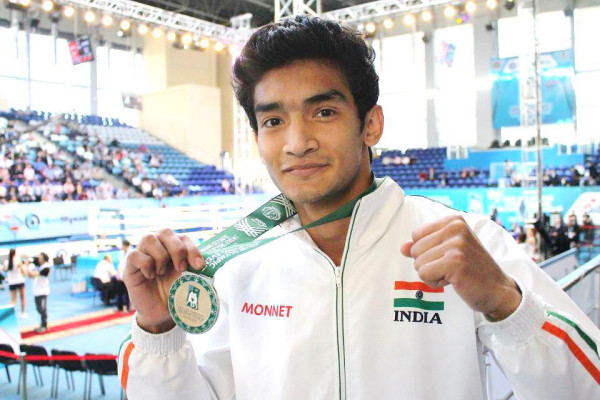