Darjeeling, Jan. 12: Subash Ghisingh's Man Friday, Mani Gurung, who had stayed with the ex-DGHC head when most GNLF leaders had snapped all contacts with him, today joined the Gorkha Janmukti Morcha. Mani said Mann Ghisingh, the president of the GNLF, didn't understand "the A, B, Cs of politics".

Mani, who never held a post in the GNLF, virtually spent every single day from 1985 onwards with Ghisingh until the leader's death last year.
Speaking to the Press, Mr. Mani said, "I stayed with GNLF for 31 years and served the party sincerely without any sort of personal selfishness, I have served the Gorkha cause and for that same reason today I am joining GJM... I have closely followed politics in Darjeeling and I weighed everyone from Lawyers to Doctorates, however I feel only Gorkha Janmukti Morcha is sincere towards the Gorkha issue..." 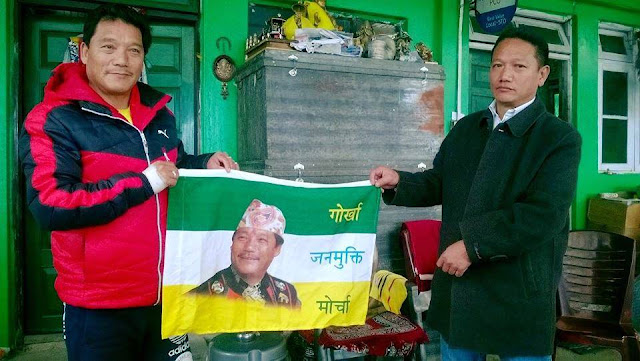 He added, "Mann Ghisingh, the president of the GNLF, doesn't understand the A, B, Cs of politics, and by the time he learns them it will be too late... GNLF cadres at the grassroots are sincere and hardworking, but those running the show are not."

Revealing that Late. Subash Ghising never considered Mr. Bimal Gurung as an enemy, Mr. Mani said, "Late. Subash Ghisingh never considered Bimal Gurung as his enemy, he used to repeatedly say, Bimal is not our enemy we have to be aware of and worry about those forces who will try to destroy our unity... today his words are coming true in the form of Development Boards, and other forms of divisions among people."

He said, "I will dedicate the rest of my life for Gorkha cause and work for Gorkha Janmukti Morcha."