‬The Gorkha National Liberation Front has started to reach out to the people in its bid to revive and to strengthen its base in the hills after remaining low for the most part of four years.

GNLF president Mann Ghisingh has embarked on a whirlwind tour of constituencies in the hills to assert the party’s presence. Mann took over as the party reins after the death of his father Subash Ghsingh in January of last year. “Our party president is visiting various constituencies and meeting people. We are holding street corner meetings and rallies in different places. So far we have received good response from the people who are fed up with the autocratic rule of the present dispensation,” said Biren Lama, the central committee coordinator of the GNLF.

The GNLF is trying to revive the Sixth Schedule issue that has been put in the backburner by the Union government. The demand was taken up by Subash Ghisingh and a memorandum of agreement to this effect was also signed in December 2005. However, in 2008 a bill to put the Darjeeling hills under the purview of the Sixth Schedule that had been placed in Parliament was rejected. Even so, the GNLF is adamant and insists that only a Sixth Schedule status would solve the problems plaguing the hills. The party also wants the now-defunct Darjeeling Gorkha Hill Council to be reinstated.

“The Sixth Schedule bill has not been scrapped as is being claimed by the Gorkha Janmukti Morcha. We want the Centre to take appropriate measures to reintroduce the bill,” Lama said adding: “Until then we demand the reinstatement of the DGHC as that council body has constitutional guarantee and is the next step towards achieving Sixth Schedule status.” The BJP had played a major role in blocking the Sixth Schedule bill in Parliament after being persuaded by the GJM, its political ally.

The GJM has helped the BJP win from Darjeeling constituency in the 2009 and 2014 Lok Sabha elections. Now, the GNLF, which was ousted from power by the GJM back in 2007, wants to gain ground in the rural areas, which were once the party’s stronghold. In particular, the GNLF is reaching out to people in the tea belts that comprise the bulk of the hill population. Today, its trade union – the Himalayan Plantation Workers Union (HPWU)- led a delegation to the office of the Darjeeling district magistrate and submitted a memorandum listing tea garden workers’ issues.

The HPWU has requested the district administration to intervene and facilitate the opening of Panighatta tea garden and also the estates controlled by the Alchemist Group.

Panighatta tea garden has remained closed since October 2015, while workers of the Alchemist Group-owned Dhootriah, College Valley and Peshok gardens are yet to receive their wages. “We submitted a memorandum to the district magistrate requesting his intervention in the matter. Workers are facing acute problems due to the closureas they have not got wages for more than four to five months now,”said Bharat Thakuri, the HPWU Darjeeling branch committee president.

The trade union wants the state government to take proactive steps and persuade the management to reopen the gardens, while another option it has proposed is to take over the management of the estates. Another option it has put forward is a takeover of the plantation land by the state government and its distribution among the workers. “Our takeover proposal was rejected by the district magistrate as the matter would come under the plantation act.

However, the district administration has said food stocks and medical facilities can be arranged if required. Further, workers will be given job cards under the 100 days work scheme,” Thakuri said. HPWU leaders said they would wait till the start of the first flush period in March-April to see the response of the management and the state government before launching an intensified agitation. 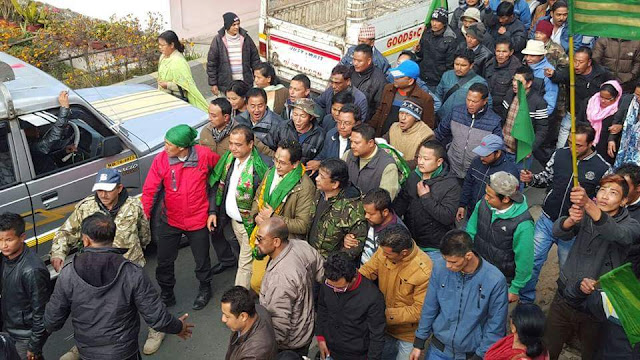