Darjeeling: The Hills parties might have been fighting for a separate Gorkhaland state for several decades now, but a schoolbook for Class IV kids in the region has already declared it as the 30th state of the country.

Though the Gorkha Janmukti Morcha (GJM), the forerunner for the statehood demand, has denied any knowledge of the book, its assistant secretary Jyoti Rai said, "One thing is clear. The word, 'Gorkhaland', is accepted," said Rai, promising to find out about it.

The error is found in the social study book being taught in a few ICSE schools in the Hills.

The word, "Gorkhaland", appears in the very first chapter on "Our Motherland and People". On page 5, "Gorkhaland" also appears on the political map of country, just below Sikkim. However, it is not mentioned in the question-answer section, though "Darjeeling" does figure in Bengal.

According to the owner of a bookstore in Darjeeling, the book is being used only in a few ICSE schools and not in government institutions. "We are selling to a few schools but they are not government ones," the owner said. "There can always several publishers involved. We are not aware of which school subscribes to which one." He promised to write to the wholesaler, who provides the book, about the error.

Interestingly, books from the same publisher but not pertaining to the fourth standard are also being sold from other stores.

The Janmukti Primary Teacher's Organization (JPTO), affiliated to GJM, said books suggested only by National Council of Education for Research and Training (NCERT) were used in primary government schools. "We use books recommended by the NCERT. We are not aware of the social study book that mentions Gorkhaland as a separate state," said Rajen Thapa, president of JPTO. 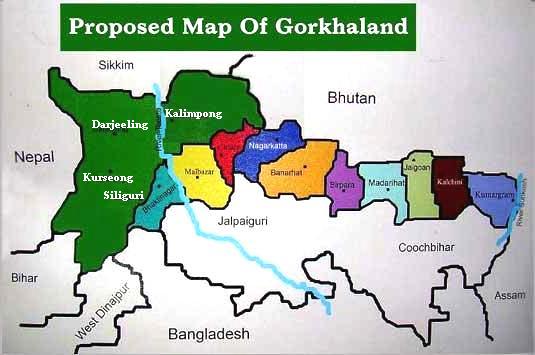