The term “GORKHA” refers to the Nepali speaking people living in India. They are spread all over the nation and have large number of population in the state of Darjeeling, Dooars, Kalimpong and Jalpaiguri districts in north-Bengal, state of Sikkim and in all the north-eastern states of India, along with a large Gorkha population in Uttarakhand and Himachal Pradesh.

The Indian Gorkhas always identify themselves as Indian citizens. Gorkhas are a mixture of Indo-Aryan and Mongolian clans. They are peace loving people living in the entire Himalayan region. The estimated population of Gorkhas in India is 1.50 Crores.

Gorkhaland is a century long movement of Gorkhas for a separate state in India. The demand was first raised in the year 1907, after the submission of a memorandum to Minto-Morley Reforms by the Hillmen`s association of Darjeeling. The demand is yet to ve fulfilled. It is a demand of Gorkhas basically living in the area of Darjeeling and Dooars, Jalpaiguri and Kalimpong districts in North-west Bengal in the State of Bengal. The proposed area of Gorkhaland is around 3,150 sq.km. which is more than the area of state Goa. It is a demand under the section 3(A) of Indian constitution. 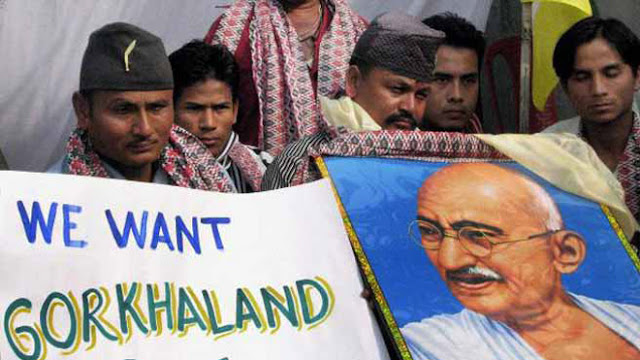 Akhil Bharatiya Gorkha League is said to be the first political party to demand the greater identity for Indian Gorkhas in the year 1952. Later on the movement for separate state of Gorkhaland was carried forward by Gorkha National Liberation Front(GNLF) led by Late. Subash Ghisingh in the year 1986. The demand was not fulfilled and the movement stopped after an agreement by GNLF and Govt. by the creation of Darjeeling Gorkha Hill Council (DGHC). In the movement 1200 people were martyred, but the Gorkhas haven`t forgotten their aim to achieve the Gorkhaland state.

As result in 2007 Gorkha Janamukti Morcha(GJM) started the movement under the leadership of Bimal Gurung. The movement gained its momentum and also gained mass support from the Gorkhas living in North Eastern states of India like: Skkim, Assam, Manipur, Meghalaya, Nagaland, Arunachal Pradesh etc. In that movement Manghal Singh Rajput immolated himself shouting “We Want Gorkhaland”.

The large number of Gorkhas living in Sikkim, Assam, Meghalaya, Mizoram, Nagaland, Arunachal Pradesh supported the agitation as the desire to see the separate state for the people who speak “GORKHA VASA or NEPALI LANGUAGE” remains a cherished dream of all the Gorkhas across India. In Assam, organizations like All Assam Gorkha Students Union (AAGSU) and Gorkha Sammelan led the mass processions in the city for the Gorkhaland. But the government of India did not respect the wishes of the Gorkha community to form a new state for Gorkhas and provide a lond due justice to them.

The Trinamol Congress (TMC) government lead by Mamata Banerjee in west Bengal is playing a divide and rule policy in the hills and Dooars to weaken the movement. During the movement slogan of “Jai Hind, Jai Gorkha” showed their patriotism to India. Thus , Gorkhaland Territorial Administration (GTA) was formed on 18 July 2011.But Gurung resigned from the GTA and renewed the movement in 2013. The burning desire to see a separate Gorkhaland state has not gone out yet from the heart of Gorkhas.

Bimal Gurung again set out for Padyatra on 3rd October 2015 to create awareness for the separate Gorkhaland state. It is also a protest against the illegal interference of state government on Gorkhaland Territorial Administration (GTA).The governments in the states and in the central continues to discriminate against the Gorkhas by not fulfilling our one and only cherished dream.

It is the grievance of Gorkhas that in some parts of north-eastern states of India and in Darjeeling and Dooars in west Bengal they are termed as “foreigners”. It is only because they speak the language Nepali, they are not rich, most of them are not educated and they are labourers working in various farms getting law wages. How discriminating it is the term “foreigners” in the ear of Gorkhas? Have we ever imagined it? Isn’t it unconstitutional?

A large numbers of people were martyred during Gorkhaland movement and the government hesitates to form a new sate GORKHALAND. The Gorkhas are living in some north-eastern states of India by rearing cows, goats on river banks. The government haven’t provided them basic needs, since the British rule they were used as labourers and discriminated cruelly. They were not educated. Those illiterate Gorkhas were only used for vote bank unknowingly and their rights were snatched. As they were the inhabitants on the bank of the river, they were swept away by flood every year. In such a condition they were shifted to another place settled in the valley and lost whatever they had.

In the year 1886 under British rule and in 1947 by the govt. of Independent India Gorkhas were given the status of protected class. But it was very discriminating that the same right was null and void by the Govt. of Assam on 27th June 1969 unilaterally. But the Gorkha Sammelan led by ex-MP Mr. Mani kr. Subba in 1993 demanded the then Hiteswar Saikia led government to implement the rights of protected class which was snatched from the Gorkhas. On 19th March 1993 the same right to the Gorkhas living in the region were given again. But the government is still throwing dust in the eyes of Gorkhas and taking some actions unilaterally, which is unconstitutional.

It is mentioned in Suguli Treaty which was signed on 2nd December 1815 that the 7000 sq.mile of land from Nepal incorporated to India. Thus, the people living in that region scattered in various parts of India and its states. It is also said that the 1815 treaty is valid and legally binding even after the Indo-Nepal friendship treaty signed in 1950. So, how long should the Gorkhas living within Indian territories fight for their identity, political right, economic development, and the educational development?

The demand of Gorkhaland is a legitimate demand. Govt. of India and it’s states should fulfill the burning aspirations of statehood for Gorkhas to protect them from the racist discrimination , to provide them the higher education and employment, to provide them various facilities for economic development, to protect them from eviction and for the all round development of the nation. People who have been living in India since time immemorial, who have a century long demand of separate state, who sacrificed their lives to dig various oil fields (like oil fields in …..Digboi, Naharkatiya, Duliajan), who settled in India on their own land under treaties signed between govt. of India and Nepal, so, how discriminating it is to call them “foreigners”?