India offers to send its Gurkhas to Brunei

Britain’s last military outpost in the Far East may be at risk amid reports India has offered to send its Gurkhas to protect the Sultanate of Brunei, a role currently performed by the British Army.

The tiny oil-rich sultanate of Brunei was a British protectorate for almost a century, and has continued to pay to host a battalion of British Army Gurkhas since independence in 1984.

But in recent years Brunei has found itself caught up in a struggle between its larger regional neighbours including India and China over the South China Sea.

Sources present at the meeting told The Indian Express that India had also offered to provide troops including retired soldiers from its own Gurkha Regiment, potentially supplanting the current role of the British Forces Brunei.

The claims will raise fears over the future of a deal in which the Sultan pays tens of millions of pounds annually to support a 1,000-strong British Army presence that informally guarantees his rule.

It comes at a time when the Sultanate is making swingeing defence cuts as its economy reels from plummeting global oil prices.

Officials briefed after the meeting that a team from Brunei would shortly visit India to “identify areas" of cooperation.

An Indian foreign ministry spokesman did not deny the reports, but said the proposal was “not a firm offer” and could be limited to provision of bodyguards rather than active military.

India is keen to build stronger ties with many Southeast Asian countries as part of a ‘Look East’ strategy designed to counterbalance China’s expansion in the region.

Energy-hungry India also imports large amounts of oil and gas from Brunei, while the sultanate is home to a 10,000-strong Indian community.

During the Sultan of Brunei’s visit to Chequers last February, David Cameron signed a deal to renew the presence of the Royal Gurkha Rifles in Brunei for another five years.

A Number 10 spokesman said at the time: "The PM noted that the garrison enables the UK to provide a permanent presence in South Asia while also providing an opportunity for British forces to undertake extreme environment training.”

Britain keeps a battalion of the Royal Gurkha Rifles in Brunei in an agreement with the Sultan, and keeps another battalion in Folkestone.

The Sultanate also has a separate military which includes a reserve Gurkha unit, made mainly of former British Gurkhas who decided to stay on in the country after retiring.

A defence source said it would likely be this reserve force that would be affected by any deal with India.

The source said: "There's absolutely no question that the Royal Gurkha Rifles battalion is going to replaced by Indian Gurkhas."
A Ministry of Defence spokesman said: "The employment of forces from other countries in Brunei is a matter for the Government of Brunei." 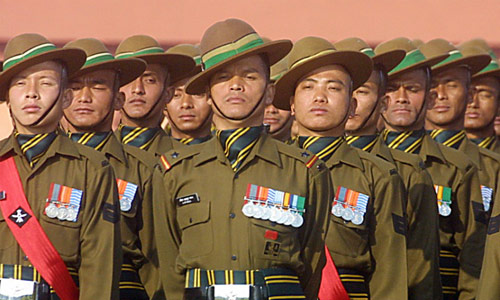