Home > Sikkim > What You Have Is "Land of the Gorkhas": What we need is Gorkhaland - "Land for the Gorkhas"

What You Have Is "Land of the Gorkhas": What we need is Gorkhaland - "Land for the Gorkhas"

Just before I started jotting down my opinion. "My Voice," as I call it. I had a little exchange of messages with one of my colleagues from work. And that conversation between us sparked the writer in me.

He seemed to be in a really bad mood. He wasn't very excited about the bone chilling weather back at his home in Darjeeling. Maybe his body has now become too used to the warm weather in Siliguri, that it couldn't cope with the change anymore. But he is born and brought up there. So, it is no surprise that he has experienced that bone chilling weather before. Why only experience, he has survived it.

Probably even danced and welcomed winter, when he was a small child. Poor soul, he couldn't do it now.

Between our conversation, I mockingly told him that he was insulting his "Jaanma Bhumi" by complaining about the harsh weather there. For everyone knows Darjeeling is famous all over the world for it's natural scenic beauty. He is supposed to be proud of Gorkhaland. He replied to me in a rather uninterested way, saying he didn't really care about Gorkhaland or even Gandhi.

I had a good laugh. Then I teased him further telling him that he is a Gorkha. Much like me. Much like us.

His reply amused me this time. "I'm not bothered about Gorkhaland. But I hate every single person who treat us badly" he had texted me.

We had a few more text wherein we talked a little more about Gorkha and Gorkhaland.

Finally we said our "bye" after a good ten minutes.

But I must tell you, this conversation left me restless.

Let me tell you a story.

A story about those proud Gorkhas who aren't around from Darjeeling or Sikkim. But from the other parts of the country. Mostly the northeast states .

We are a good number in size of the population. And for the record, We speak the same Nepali language much like our neighbours. We follow the same sacred traditional norms and customs with an equally pristine heart like everyone. We rejoice and dance in Dasaai-Tehaar. We too have our "Gaon Budo" (G.B), in case you want to know if we had any.

In short we have everything that our neighbours have. Except one thing.

What we have is a "Gorkha's home" in "someone ease's" land. It might sound non-relevant but it is the sad truth, where we are at, we are treated as forever outsider, in spite of our our people living here for generations.

You don't believe me, ask any Gorkha who isn't around from Darjeeling or Sikkim and he shall tell you the same tale.

We live in the shadows of the other communities. We don't blame them for our sorry conditions, because it is "their land" of course. Not ours. Instead we are thankful to them for allowing us to live among them like brethren.

We laugh and sing along with them. Even tap a feet or two, when such occasions arises. They love us and we love them equally.

There has been many inter racial marriages between us. We live in total harmony. Only sometimes do tension arise here and there. At times, petty ones and sometimes really bad ones though. I say, It's bearable.

And this is when we envy our neighbours.

We envy you not because we don't have a land of our own. We envied you because you have a land that you could proudly call your own.

A "land of the Gorkhas."

You might be bored by the time you have reached here. So, let me excuse myself .

But before I end my sorry tale, I would love to understand why did my friend reacted so indifferently? Why was he so not bothered or committed towards the cause of a state for the Gorkhas? what changed that he did not care about it any longer?

Maybe it is bad politics, which has plagued the Gorkhas for over a century now.

Maybe he was tired of fighting for a cause that he feels is impossible to ever accomplish.

Maybe he feels that it is not his fight anymore.

Maybe he has got used to the city life and no longer cares about anything else.

Or could it be that he has lost all hope?

It could be anything. Just anything, I tell you....

But always remember, You have a land to call your home.

You all have "land of the Gorkhas," let us strive together to turn it into "Gorkhaland" 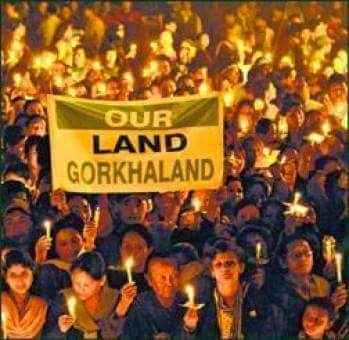