Darjeeling 2 Mar 2016 Gorkhaland Territorial Administration chief executive Bimal Gurung today inaugurated the new building of the upcoming degree college in Bijanbari, the construction of which started in 2012. Last month, the GTA chief also opened a new building of Mirik College keeping with the hill body’s plan to promote education in the hills.

The college was established in 1995 at Lower Samelbung, 5km from Bijanbari. Students had to face a lot of problems due to the distance. The college has now been shifted near the market area at Chungtung Tar and is spread over 6 acres of land. The new building is three-storeyed and the college offers B.A. general courses in History, English, Political Science, Economics and Nepali.

Sameer Sharma, the teacher in-charge of the college, said, “We had submitted a requirement request to the GTA following which the new building was built. Now that we have a new structure with more space and facilities, we will apply for Honours courses as well, although this will depend on the roll strength.”

The new building, which has been built at a cost of Rs7.3 crore, will be able to accommodate 450 students in 12 classrooms. The students come from areas such as Rimbick, Sukhaypokhari and Goke. The new building also has three staff rooms and a multi-purpose hall. It presently has six teaching and eight non-teaching staff members. “We will shift to the new building at the end of this week. And we hope to start the session in April when the Part 3 exams start,” said the teacher in-charge.

While unveiling the new building, the GTA chief executive said it was a gift to the people of Bijanbari and to the future of the students.

“There is more work to be done in the hills. The GTA will strive to work for the people. This college is a gift to the students of the region as they are our future,” said Gurung.

The GTA has promised to provide two buses to the college as has been done for Mirik College. “This college and the one in Mirik have been built from central government funds and nothing has come from the state government. Vidyasagar High school here will also be converted into a model school,” said Gurung.

The cost of the entire project is pegged at Rs7.3 crore and the new building has been constructed at half the cost, with more work to be taken up in the second phase. An administrative building, fencing of the campus, water supply, a science block, hostel facilities and a playground will be constructed later. 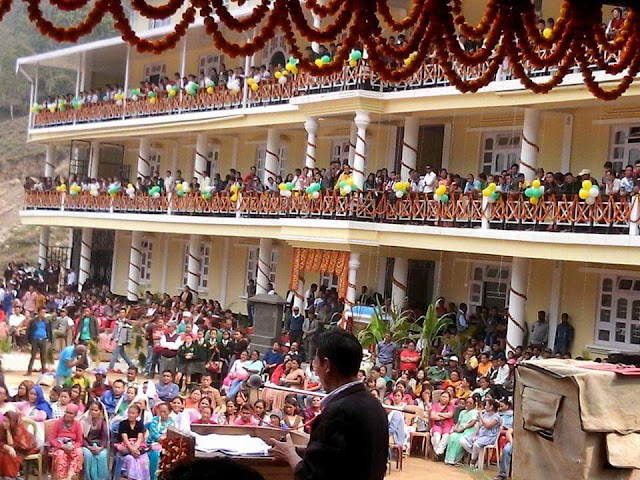