GNLF to support TMC and JAP in Assembly Elections 2016

GNLF (Gorkha National Liberation Front) has decided to support TMC and JAP (Jan Andolan Party) in this Assembly Elections 2016. It is stated that GNLF will support TMC in Darjeeling and Kurseong and JAP in Kalimpong.

The following is what Neeraj Zimba Tamang a senior GNLF leader had to say on the party's decisions.

Elections to the Bengal Assembly will take place in April 17, 2016. The Gorkha National Liberation Front, as you all now known by now, has decided not to directly enter the electoral fray. On this occasion, I on behalf of the G.N.L.F Party, am pleased to present before you the 'PARTY’S DECISION DOCUMENT', which sets forth, although in few words, our Party's core beliefs, basic commitments to our people, realizing the dream and destiny of Gorkha Father Subash Ghishing and our priority agenda of Sixth Schedule for the coming years and beyond.

The GJM era in Gorkha politics is now almost over. The era of corruption and dadagiri …distrust and disharmony … murders and arms/land mafia …. violence and vandalism … nepotism and favoritism .. must come to an end. Godse in the mask of Gandhi has to be unveiled. The GJM has failed the Gorkha community and the Gorkha people in all aspect. It has just remained a party of few vested and agents of status quo. It has just made fake promises and zero performance. The era of the G.N.L.F has once again begun --- the era of truth, justice and equality, democracy and all round development -- will triumph. Be Proud that you will be a part of it.

For the G.N.L.F, election has always been secondary. Our vision, our political mission and our distinctive identity have always been personified by OUR GREAT LEADER SUBASH GHISHING. Since the inception of the GREEN FLAG on 5th April 1980, our leader had relentlessly worked until his last breath for the identity, destiny and survival of the Indian Gorkhas and for their homeland, guiding the Party throughout its steady march forward in over past four decades, inspiring us with his speeches, his thoughts and philosophy, poetry and policy, his books and simple looks, sometimes with his deafening silence, and above all his towering and incorruptible personality. Even in death he continues to inspire us.

I do hope that this ‘PARTY’S DECISION DOCUMENT' succeeds in persuading you to give your unflenching support to our Leader Sri. Maan Ghishing and our GNLF Party.

We are a great party, and yes we can be even better. Believe in us. Jai Gorkha. Jai Subash. 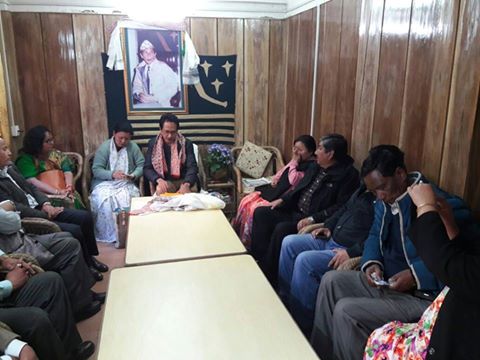