Darjeeling, March 4: The fledgling Jan Andolan Party (JAP) that was looking to fight this election today got a shock when Mamata Banerjee announced that its chief, Harka Bahadur Chhetri, would be the Trinamul candidate from Kalimpong.

The announcement was made by the chief minister this evening.

A Trinamul senior leader, when asked about Chhetri's candidature, today said: "Chhetri had sent a letter to Trinamul agreeing to contest as the party's candidate."

Chhetri said in the evening that he would contest as a candidate of his own party. "The confusion was created due to Trinamul's hurry. I would like to clarify that I will contest as the candidate of the JAP from Kalimpong. I would welcome support from any other political party, including Trinamul," he said.

A JAP leader who did not want to be named said they would not believe the claim of any other party without any hard evidence.

The Jan Andolan Party, formed by Chhetri after he quit the Morcha over differences with its chief Bimal Gurung, was ridiculed by the hill's main political force.

While JAP leaders said there "must be a genuine mistake" on Trinamul's part, the Morcha said the fledgling hill party was so democratic that it allowed its chief to contest for another party.

The jab was a Chhetri who quit the Morcha after complaining that Gurung was autocratic.

Amar Lama, a member of the bureau in the Jan Andolan Party, said: "This must be a genuine mistake. There were talks of an alliance with TMC but how can the president of another party announce the name of our president as their official candidate. He (Harka Bahadur) is not a primary member of the TMC. The statement has to be withdrawn immediately and the mistake rectified."

Even if there was talk of an alliance with Trinamul, Mamata's announcement has virtually closed this option with the announcement of Shanta Chhetri and Sharda Rai Subba as Trinamul candidates from Kurseong and Darjeeling, respectively.

"The announcement of Harka Bahadur's name is out of the blue and a cause of a major embarrassment," said a Jan Andolan Party supporter.

The Morcha did not let go of the opportunity today to laugh at Chhetri.

Binay Tamang, the assistant secretary of the Morcha, said: "We always said Harka Bahadur Chhetri was working to dilute our statehood demand and this has been proved after he was officially named the Trinamul Congress candidate from Kalimpong. Everyone in the hills knows that TMC is opposed to the statehood demand."

Tamang ridiculed Chhetri, saying: "We always said Harka Bahadur is the B-Team of the TMC in the hills. It has now been proved that they are the A-Team of the TMC and the hill TMC leaders are actually the B- team. The JAP seems to have so much democracy in its party that its president can also be named as the official candidate of another party." 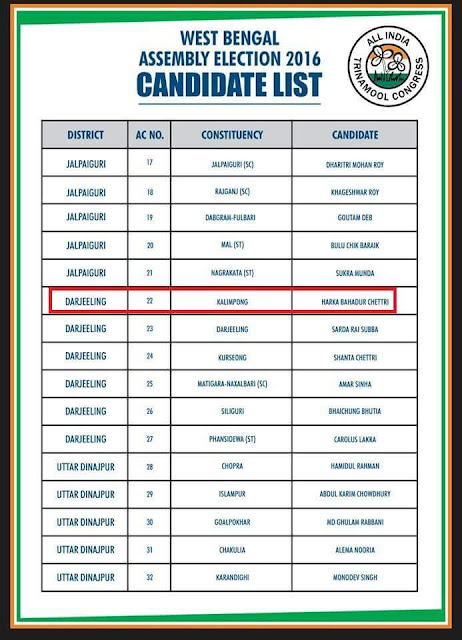