Those affected by the July 2015 landslide that claimed 32 lives in several parts of the Darjeeling hills today paralysed Mirik and its surrounding areas by setting up a road blockade demanding speedy rehabilitation. The victims have come together under the Tingling United Victim Rehabilitation Committee to raise their voice.
On July 1 last year, heavy landslides due to incessant rainfall caused extensive damage to life and property across the hills, with Limbu Gaon in Tingling alone registering 19 deaths. The landslide in the area displaced more than 350 households of which 150 were directly affected and required rehabilitation. It was decided that the state government and the Gorkhaland Territorial Administration would work together to rehabilitate the affected people to a tea garden nearby. The GTA has already given away the compensation it had promised to the families of the Tingling landslide victims.
However, even after six months of the tragedy, the victims are yet to be rehabilitated forcing them take the agitation path. “We were promised to be rehabilitated but that has not happened even after so many months. Now, the monsoon will set in soon and this does not augur well for us. This has left us with no options but to agitate,” said Mani Rizal, the secretary of the rehabilitation committee.
According to administrative reports, the July 1, 2015 landslides destroyed 503 houses fully and 1,414 partially in Mirik and Kalimpong. With no rehabilitation, many victims still continue to take shelter in community halls while several others have started living with their relatives. Around 500-600 people from the eight villages in Tingling squatted on the road since morning with placards in their hands. Schools and government offices remained closed and vehicular movement also came to a halt.
According to the TUVRC secretary, the management of Tingling tea garden, which is owned by the Jayshree Group, had promised to shift the workers to another plot of land in block 10 of the estate. “Earlier, the management had assured to shift us to another area of the garden and we had agreed to the proposal. But the management is going against its promise now. And it wants to know whether the state government or the GTA would provide compensation to the residents for parting with their land,” alleged Rizal.
Meanwhile, the district administration said the issue of resettlement rests with the tea garden management and the government cannot intervene in the matter. “There are two issues that need to be addressed. Firstly, to provide a house building grant to the affected and this is already in progress. The issue of resettling the affected arises next. On this count, the state government cannot impose itself on the garden management as it is an internal matter,” said Darjeeling district magistrate Anurag Srivastava.
The district magistrate maintained that the state government leases out land to gardens and it is the responsibility of the management to rehabilitate workers whenever the need arises. The government is not liable to pay compensation to garden owners, according to Srivastava. “We cannot intervene directly but the management can table a proposal saying the workers are being shifted to another plot. If the proposal meets the lease agreement, the matter can be settled with no further hiccups,” he added.
Arun Sigchi, the GTA Sabhasad from Mirik, said he would approach the tea garden management to settle the issue at the earliest. “We are sympathetically looking into this issue as it is a serious matter. We will sit for talks with the management so as to reach to a conclusion,” he said. Neither the owners nor the management of Tingling tea garden were available for comment even after repeated attempts at contacting them. 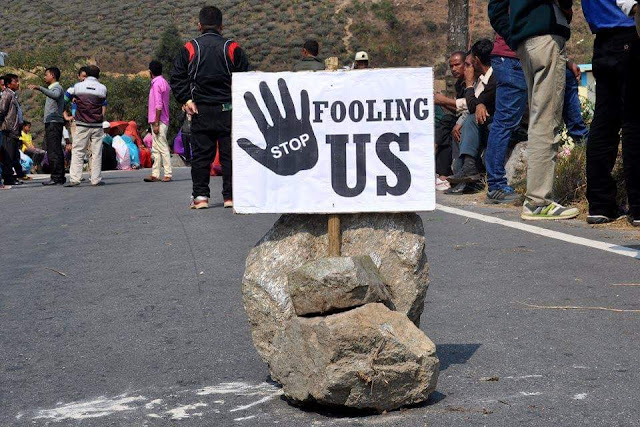