Pramod Giri, HT, 14 Apr 2016, Kolkata: Vishal Lama, Usha Tamang, Padam Lama and Ganesh Lama may or may not win the Assembly elections. But they are the lucky ones to represent their community for the first time in the Dooars region of Alipurduar and Jalpaiguri districts where most seats are reserved for Scheduled Tribes.

Contesting from three seats these candidates represent the Gorkha community which has the second largest population after the Adivasis in tea producing belts of Dooars. Among the six seats n Dooars, five are reserved for STs while Alipurduar is a general constituency.

Mal, Nagrakata, Madarihat, Kalchini and Kumargram, all reserved Assembly seats for Scheduled Tribes, have always been sending MLAs belonging to the Adivasi community.

The inclusion of Tamang and Subbas belonging to Gorkha community in the Scheduled Tribes list in 2002 has changed the equation thus giving an opportunity to the Gorkha Scheduled Tribes to vie for MLA seats in the Dooars.

Dooars, known as the land of tea gardens and forests, has always lagged behind in terms of development while malnutrition deaths in the closed and abandoned tea gardens have become a regular occurrence. 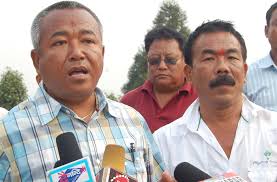 Vishal Lama and Usha Tamang are contesting as BJP and Independent candidates respectively from Kalchini. The Trinamool has fielded Padam Lama from Madarihat and Ganesh Lama is the All-India Gorkha League candidate from Nagrakata.

Mohan Sharma of the Trinamool, probably the best known political leader in entire Dooars, who is a Gorkha, said, “This is the first time Gorkhas are contesting the Assembly election in the Dooars.” Sharma, the sabhadhipati of Alipurduar zilla parishad, told HT, “Had Subbas and Tamangs not been accorded Scheduled Tribe status, hardly any Gorkha would have contested the Assembly election in the Dooars.”

Though reservation has largely helped to uplift the socio-economic conditions of the Adivasis, this has also come on the way of Sharma and Amarnath Jha of realising their dream of achieving higher political status. Sharma and Jha, both Brahmins and who were in the Congress for a long period before joining the Trinamool, are credited with grooming many junior Adivasi leaders who later became ministers, MPs and MLAs.