New Delhi, April 3: The Modi government has started the process that could lead to grant of Scheduled Tribe status to 11 Gorkha communities, mostly living in Sikkim and poll-bound Bengal.

While the Sikkim government called it a step towards correction of "historical injustice", questions were raised about the timing of the decision that comes a day before Assembly elections kick off in Bengal.

The Gorkha Janmukti Morcha, which is fighting the elections in alliance with the BJP, has been demanding ST status for these communities and will likely make it a campaign point. The three hill seats will vote on April 17. 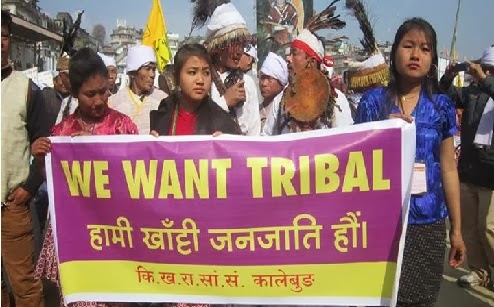 "It is because of the Morcha's consistent effort that the Centre has taken this initiative. Our alliance with the BJP is now slowly bearing fruit. We are confident of a positive outcome in three months," Morcha chief Bimal Gurung said today.

Ten of the communities have a sizeable presence in the Darjeeling hills. The eleventh, Dhimal, is concentrated in the plains.

The move is controversial as it appears to give priority to Gorkhas while the demand for ST status from about a hundred hill tribes from several states, including Assam, Odisha, Chhattishgarh and Jharkhand, is pending.

"This is politically motivated. It is being done in violation of norms. Many deserving communities are waiting to be included," former tribal affairs minister V.K.C. Deo said.

A.B. Ota, director of the SC & ST Research Training Institute, an Odisha government think tank, said the state had recommended inclusion of a number of tribes. If the Centre is considering including the demand of the Gorkha, that of Odisha should be considered simultaneously, he said.

According to existing norms, ST status is granted to a community after Parliament clears a bill amending the list of STs.

While the Centre moves the bill in Parliament, the initiative has to be taken by the respective state government that has to recommend specific communities for inclusion. The tribal affairs ministry seeks the opinion of the Registrar General of India and the National Commission for STs, after which the bill is taken to Parliament.

The UPA government had introduced a bill in 2013 for inclusion of the Nari Kuruvan community of Tamil Nadu and the Thanuhar community of Chhattishgarh, Deo said. "There was no controversy over their inclusion. The bill could not be passed. The NDA is not taking interest in that bill," the former minister said.

The task force on scheduling of tribes, headed by then tribal affairs secretary Hrushikesh Panda, had recommended about 30 communities for urgent inclusion. None was a Gorkha community. A task force member said the list included communities that had been historically ignored. Some were scheduled as hill tribes in the 1930 caste census but were not included in the list of STs after Independence, while others had lost the status because they migrated to some other state.

Tribal affairs ministry sources said the report was examined by an informal group of ministers headed by home minister Rajnath Singh but there has been no movement.

Tribal affairs minister Jual Oram did not wish to comment on the reason for choosing to take up ST status for the Gorkha communities and not the others. "I will find out and tell you," Oram said.

"These 11 communities are very poor and fulfil all criteria to be included in the schedule. The initiative by the government is a corrective action of the historical injustice," Upadhyaya said.

He said the proposed inclusion would help Gorkhas who are living in Sikkim, Bengal, Uttarakhand and northeastern states.

At present, nearly 700 communities are included in the schedule. They are entitled to reservation in government jobs and education. The government also runs affirmative schemes like residential schools and scholarships for tribal children.