Home > featured > Fire in Darjeeling town - all you need to know

Fire in Darjeeling town - all you need to know

13th April 2016 Its very sad to report that the part of Darjeeling town was once again engulfed in fire early in the morning today. Following are thing that is all you need to know which has come out of the event till now.

1.Fire Breaks Out At Shyam Brothers Line Darjeeling
Fire broke out at Shyam Brothers line in Darjeeling Town which initially engulfed two shops completely - Metro Book store and Dullaram  have been burned down almost 80%. According to locals, the fire broke out at 2 AM and despite informing, the fire-brigade arrived late at the scene, after an hour to douse the flames.
2.Deliberate Sabotage Allege Locals
Residents of C-building which is near the P-building that caught fire in Darjeeling town today have alleged that they could not get out of their houses as someone had locked their door from outside. Residents claimed that they couldn't get out, until an individual broke his window and managed to get out and open everyone's door.
3.Fire Spread From Furniture Godown Say Locals
Locals have alleged that the fire which engulfed P-building and parts of Metro bookstore line started from a furniture godown and spread rapidly. Even though locals fought the fire bravely with buckets of  water, they could not help save these properties.
4.Fire Tankers Run Out of Water - Municipal Chairman Comes to Rescue
Once again the fire tankers were without water in Darjeeling, and had it not been for the Municipal Chairman Mr. Amar Rai the fire would have become worse.
After the initial tanker doused some flames it ran out of water and there was no alternative. Municipal Chairman Mr. Rai then called up all the water tankers that ferry water to town and requested them to assist in dousing the fire. He also requested help from Kurseong fire-brigade. 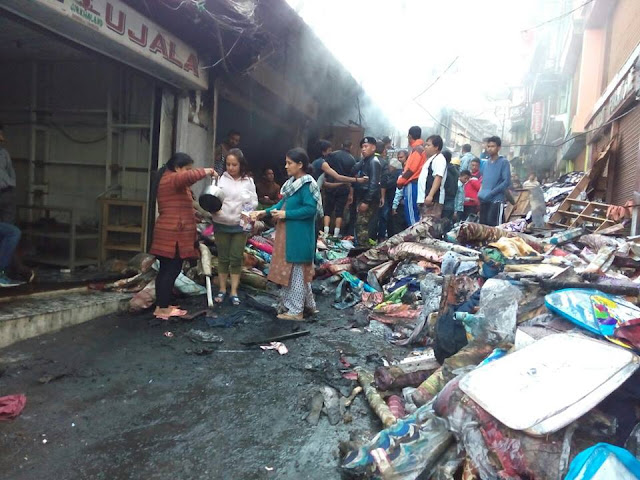 Thanks to the timely intervention of local residents and Mr. Rai the flames are now under control.

With inputs from TheDC