Didi banks on divide and rule policy in Hills

April 17, 2016, Darjeeling As the Hills go to polls on Sunday, an issue that takes prominence among others is Chief Minister Mamata Banerjee’s decision to form development boards for individual ethnic communities.

While this could help the Trinamool Congress chief break the Gorkha Janamukti Morcha’s monopoly and help her gain a foothold in the area, most local leaders criticise her policy of “divide and rule”.

Mamata initiated the process of forming development boards for Hill communities — Lepcha, Mangar, Sherpa, Bhutia, Limbu and Rai— in 2014. Much to the chagrin of Morcha leaders, the process rendered the autonomous administrative body, Gorkha Territorial Administration, somewhat ineffective as the state government started releasing funds for these communities bypassing Morcha leaders, who dominate the autonomous body. 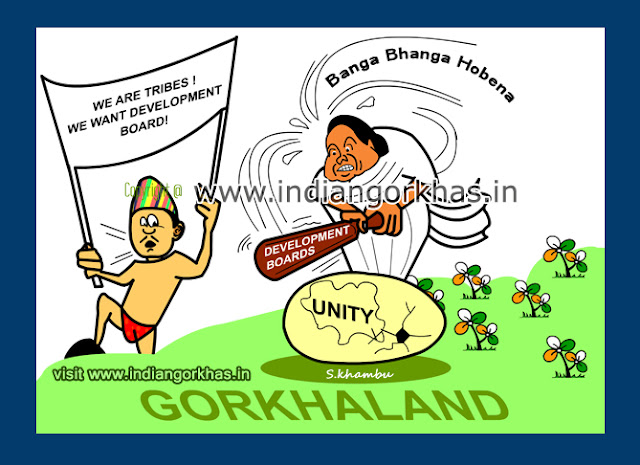 Morcha president Bimal Gurung said the move was taken for “political gain”. “The boards have only built toilets; there has been no real development,” he said.
Gurung found support from Manish Rana Mangar, assistant secretary of Mangar Sangh Bharat.

“The formation of these boards is a ploy to create friction between communities. It has become clear that this was done with the Assembly polls in mind. The government’s long-term plan seems to divide Gorkhas so that no one can demand a separate state in future.”

Gurung’s bête noir Hadka Bahadur Chhetri, who left the Morcha to form his own outfit, however, countered the criticism.

“Morcha leaders are unhappy because the government is directly releasing funds to these boards, which makes it difficult for Gurung and his associates to make money,” he alleged.

He claimed that most of these communities are moving away from Morcha due to the corruption and nepotism of its leaders. Chhetri found support from Neema Shering Sherpa, convenor of the Sherpa Cultural Board. “The board is not confined to community development; it has also given us a separate identity. The demand for Gorkhaland is like a fairy tale, it’s a sentiment. We’ve been with this demand and continue to be with it but common people have always been short-changed in the name of Gorkhaland,” Sherpa said.

Palden Bhutia, chairman of the West Bengal Bhutia Development Board, said, “Everybody used to think Gorkhas were the only community here but now they realise there are others too.

“Unlike earlier times, when funds used to be sourced through leaders, the money is now going to the needy people only. This makes a lot of people unhappy.”

Sources said Banerjee was unhappy with Trinamool’s failure in the 2014 Lok Sabha elections, when she fielded ace footballer Bhaichung Bhutia, a move she hoped would help her get a grip on the Hills, which has been out of bounds for mainstream parties since Gorkha National League Front started the Gorkhaland agitation in 1986. “The Left preferred to keep Gorkha leaders in good humour and formed an autonomous hill council. Leaders became flush with crores in government funds but the area remained under-developed. If the boards can manage to change that, it would be a welcome change,” said Darjeeling-based political analyst PN Lama.

Lama, however, pointed out that Mamata’s decision to form individual community boards is in essence a reversal of the unifying process 19th Century Nepalese poet Bhanu Bhakta Acharya had undertaken.

Besides translating the Ramayana from Sanskrit, he had brought together Gorkha tribes and created a nationalistic identity.

A large number of local residents say that their support for Gorkhaland notwithstanding, most would prefer development in terms of education, healthcare and employment so people do not have to move to metropolitan cities in search of jobs.