With a little over 7 years of directly being involved in politics and decades of indirect involvement as political commentator (as Dr. Harka himself claims), if his arguments are "we'd win if we contest Prime-ministerial election," then I guess we have grossly over "hyped" or misjudged his intellect.
Try hard as I may to give Dr. Harka and JAP the benefit of doubt, I fail to see the genuineness in him and his party.

Forget about the random weird statements he makes at times, the formation of Kalimpong district is now being politicized by him largely for the SURVIVAL of his newly created party.
Politicizing would have still been valid, but for the fact that Momota had announced her "sympathetic" consideration for district formation way before elections... and not just of Kalimpong but five other districts. So this should not have been made an election issue - it was already a non-issue.

However, his recent move in scaring the people of Kalimpong and instilling fear in them that district formation is impossible without JAP winning the MLA seat, while subtly also implying that non-JAPers may oppose district formation if JAP doesnt come to power, indicates his real motive in flouting JAP - POWER. 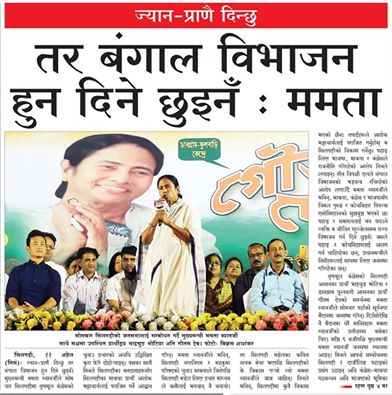 After all, his 7 years in active politics must have given him a small glimpse of what it means to exercise power.

Winning for him is securing power - THAT POWER, which incidentally is controlled by Momota, who is fundamentally OPPOSED to the formation of Gorkhaland. But for Dr Harka Bahadur Chettri it is apparent that winning is all that matters.

If we cannot see through this and continue to support these selfish group, then we totally deserve to be under Momota. Because our actions will have proved that we still need the "bhadraloks" to decide for us... to control and finally govern us from Kolkata.

Despite all their denial JAP is with TMC and TMC is with JAP as made evident in their united election rally in Darjeeling yesterday, and while in the hills JAP talks of "eventual attainment of separate statehood..." in the plains Mamata asserts and reasserts Gorkhaland will never be formed. So what explains JAP's justification for supporting and seeking support from a party that is fundamentally opposed to separate state for the Gorkhas?

It is said that "power corrupts and absolute power corrupts absolutely," and no where is it made more apparent than in Dr. Harka and JAP's policy of trying to hunt with the hounds while pretending to run with the hare.