Darjeeling MP SS Ahluwalia has taken strong note of non-inclusion of Nepali language option in State Bank of India recruitment and has written to the Finance Minister as well as the Chairperson of SBI demanding inclusion of Nepali language option, and extending the application deadline to allow for youths from Darjeeling, Terai and Dooars region to complete the application formalities.

MP Shri. Ahluwalia has also demanded that Nepali being a national language of India, should be offered as an optional language in all states of NE and rest of India where a large number of ethnically Nepali people reside.

Here is the text of his letter to the Finance Minister.

Re: Exclusion of Nepali speaking candidates from SBI Recruitment

Dear Arun ji,
I want to draw your attention to the plight of the Gorkhali community in India, whose mother tongue is Nepali. Recently the SBI through the advertisement number CRPD/CR/2016-17/01 dated April 3, 2016 has sought applications for the post of Junior Associates (customer support and sales) for which there are close to 15000 vacancies that have opened up all over India, out of which around 2000 have opened up in the state of West Bengal.

When youths from my constituency logged online to apply for the post, they were taken aback to realize that the only linguistic option that they could chose for official language in the state of West Bengal was Bengali. Where as in Darjeeling, Terai and Dooars region majority of the people learn and speak Nepali and not Bengali.

In not allowing aspirants from Bengal to chose Nepali or any other official state languages – Hindi, Urdu etc, the State Bank of India has effectively disqualified those whose mother tongue is not Bengali, even before the recruitment process has begun.

I strongly feel that this is against the constitution guaranteed right of every national language being treated as equal, and also this is infringing upon the fundamental rights of my constituents to be able to chose their mother tongue, which is a recognized national language of India, as a linguistic option. I also feel that in not allowing the Gorkha aspirants to chose Nepali as a language option anywhere in India, the State Bank has turned them into a 2nd class citizen, whose language – even though recognized by our Constitution as one of the national languages – is actually not considered worthy of landing a job with a Government of India entity.

It is because of such instances of repeated discrimination, even by a Central government enterprise, the Gorkhas have been agitating for decades, asking for autonomy for themselves towards ensuring that they will not be discriminated against, on the basis of their language, ethnicity, or culture.

I therefore request you to kindly instruct the State Bank of India and all other Central government entities to ensure that Nepali language and other languages that are actually recognized as Official Language of our state should be made optional during the application process in West Bengal. In addition, Nepali should also be made optional in all the North Eastern states, Uttar Pradesh, Uttarakhand, Himachal Pradesh and Delhi where Nepali speaking people reside in a large number.

Also, since this application process started from 5th of April, 2016 and is only going to last till the 25th of April, all the applicants from my constituency have not been able to fill up their forms so far, due to the linguistic barrier.

Given this, I request you to kindly instruct the State Bank of India to extend the date by when the application can be filled in to 15th of May 2016, so that all those youths from my constituency who have been deprived from applying for these said posts are able to do so.

I look forward to a positive response from you at the earliest.
Kindest regards 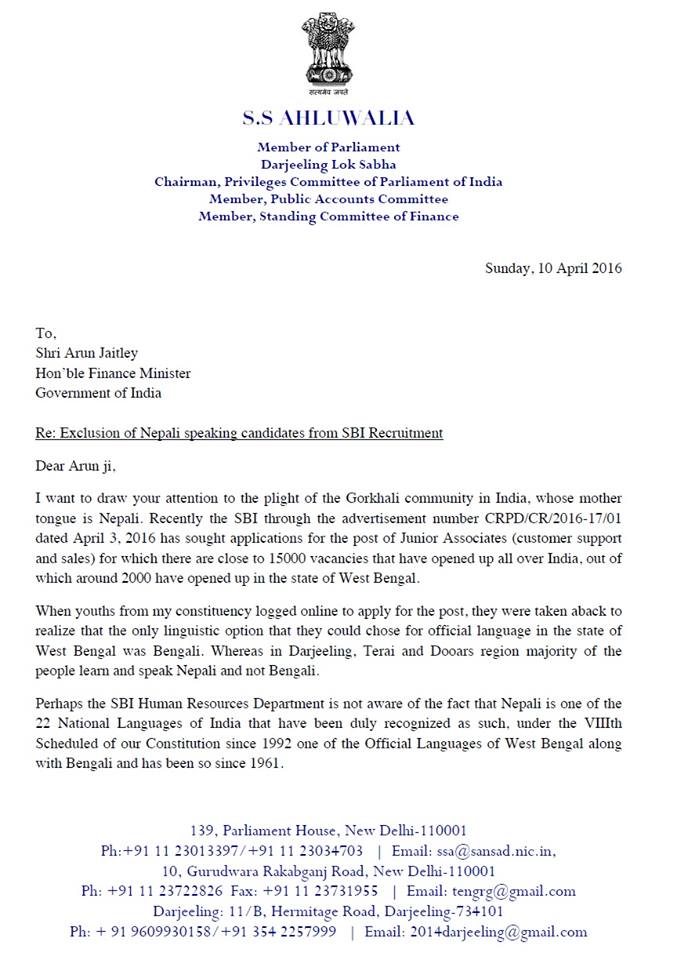 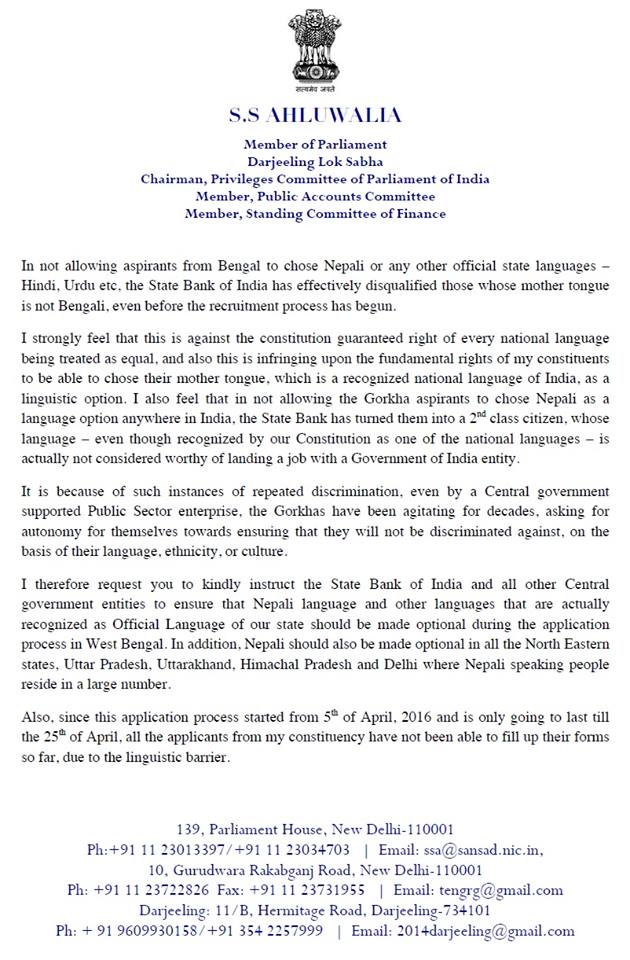