As the election date approaches closer, it is becoming easier for the people of the hills to make their choice. Only the 'candle' seems to be burning for the people other symbols seems to be in the dark. This is due to insanity prevailing in the 'party of intellectuals.' Why I say insanity among them is because of their political gimmick. To gain benevolence from the 'dark invisible hand which dictates terms to the party leaders,' (as their recently resigned AGS Mr. Topden Bhutia says), they have contemplated to formally challenge the formation of a panel to oversee the demand of including communities from among the Gorkha community in the Scheduled Tribe List of the Central Government. JAP's decision to challenge this as a violation of code of conduct is not in favour of the progress of the people. This may have been a case of violation of code of conduct but they could easily have ignored thinking the larger good it can do to the people. If they genuinely wanted the welfare of the people then they would not be contemplating to challenge this panel formation and dampening the spirit of the people. 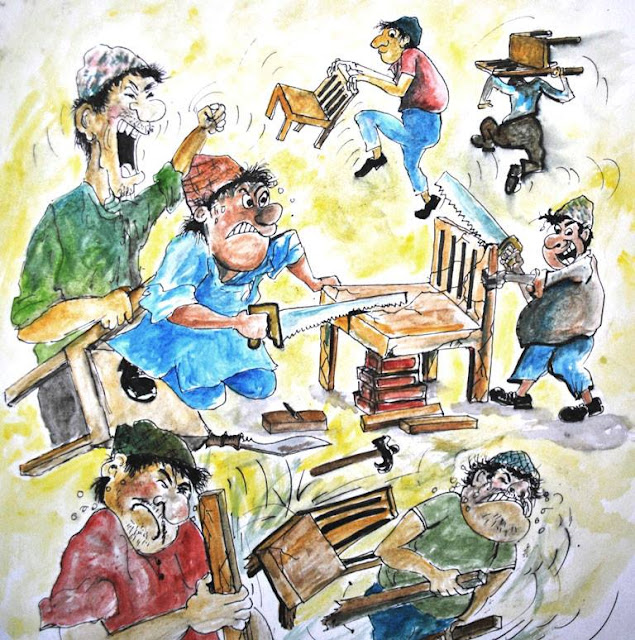 When the formation of JAP was announced their manifesto declared that they will work towards the overall development of the people. This inclusion in the Scheduled Tribe list will be a step for such a development they had envisaged for the people of the hills. So why are they opposed to this panel and effort of the GJM? They are opposed to this idea because they cannot derive any credit from it and all the credit will go to GJM, which will enhance the reputation of GJM and dent their nonexistent status at this crucial juncture. For a mere political gain over the rival they are ready to hurt the sentiments of the public, the very public whom they are requesting to vote in their favour. This reflects the arraignment of the recently resigned AGS of the party, that JAP is dictatorial and does not have any transparency. The repercussion of this will be that the design of the 'dark hand' of Didi will not succeed in the hills and therefore the intellectuals will have to do a lot of explaining to their patrons.
JAP is in a catch 22 situation, if they support the formation of the panel and thereby the inclusion of the communities in the ST list then they will have to face the ire of Didi and if they do not then that of the public. The intellectual rather chose to face the ire of the people. Very interestingly, Dr H B Chettri has shown much confidence in the state government, he says that "the important thing in the order is that the committee has to consult ‘respective state governments,’" implicitly expressing that the ball will finally be in the court of his patrons. Thereby meaning, vote for me or otherwise his patrons will not allow the realisation of the tribal status. So will we let this happen? His confidence comes from the fact that he is well aware that the Bengal Government does not want any welfare of the Gorkha people and will try to create obstacles for the inclusion of these communities in the ST list. Not stating explicitly he is saying vote for TMC and JAP candidates otherwise this tribal status can be withheld.

To gain the confidence of the people it would had been better if JAP too had welcomed the decision. It would had done them a world of good had they applauded the declaration. But personal ambitions, which is directly proportional to the compassion of Didi has stopped them from doing so. If, H.B.Chettri as a proclaimed leader of the people of the hills, cannot stand against the malevolent design of Didi, how can we believe him that he will in the future do good to and for the people.
The same thing has also been reiterated by the hill TMC. This proves that the coordination between JAP and hill TMC is perfectly harmonious. This further proves that they are the one and the same. They are there only to implement the desires of Didi and make personal gains. In such a situation it is important for the people to understand the situation and not support them. JAP and GNLF are working in disguise to undo the years of struggle people and the region has witnessed for the creation of Gorkhaland, break the unity of the Gorkhas and thereby again make us the subservient, oppressed and exploited and unquestioning citizens. Better sense has prevailed among the ABGL leadership that they have withdrawn the support to TMC candidates. It is hoped that the authorities of the different Development Boards also see the benefit of the larger goal and not support the TMC in their scheduled meeting.

This election is a testing time for the Gorkhas. This election is the time when we are being plotted against by our own people, not by choice but by design. We have a great chance of bringing about change in our daily lives. With a friendly party leading the central government, who is also trying to establish their foundation in Bengal and is in alliance with GJM, a good result for GJM will do wonders for the development and welfare of the place and the people. This can only be ascertained by the people, by making the right choice.