This Election: Why GJM?

An interesting old video was posted today in my whatsapp, which shows Dr. H B Chettri addressing a meeting somewhere in the plains. He concludes his speech saying that we will work together, walk together and reach our destination together. Yes they have worked together as well as walked and is trying to walk together to reach the destination. But  the most salient question is what is their destination? To my mind only one answer seems apt that is to dislocate the demand of Gorkhaland and those who have aspiration for the creation of Gorkhaland.

This is a critical phase in the political sphere of the hills. This period will determine the future of the demand for Gorkhaland. GJM therefore becomes an important element for all the people who have dared to dream the realisation of Gorkhaland. There is a adage in Nepali taro ko deuta bhanda chau ko bhut kaam lagcha. GJM is the chau ko bhut and therefore we can count on them to keep alive our aspiration. Many have accused them that they have sold of the issue of Gorkhaland but what needs to be remembered is that they have not given up the issue and the right to demand for the separation of hills from Bengal. In the tripartite Memorandum of Agreement Between Government of India, Government of West Bengal and Gorkha Janmukti Morcha for creating an autonomous Body to be called Gorkhaland Territorial Administration they have vehemently reiterated that they would not give up the demand of Gorkhaland.  In the first page of the memorandum itself it says, 'Whereas after several rounds of tripartite meetings at the ministerial and at the official levels, the GJM, while not dropping their demand for a separate State of Gorkhaland has agreed to the setting up of an autnomous Body......'

What is important for all to understand is the fact that GJM has not given up the demand of Gorkhaland even when under pressure to sign this agreement, unlike the GNLF which surrendered the demand while signing the DGHC agreement. GNLF have forgotten their antecedence and is now again trying to attract the people of the hills into false consciousness. However, the stand of the GJM is acknowledged by both the Government of India and West Bengal, which makes the GJM very important for all the people of the hills. They did not succumb to the pressure created by the Government of West Bengal, which has now been accepted by the latter and have revised their strategy and is making use of ambitious 'party of intellectuals' as well as unsuccessful individuals and parties to weaken the tenacity of GJM and the people of the hills to demand Gorkhaland. Further, unlike GNLF, who completely failed the people and moreover let the Gorkha down by not keeping alive the demand of Gorkhaland in their zest to sign for DGHC, GJM have made the centre and the state governments realise that the demand for Gorkhaland and the struggle to achieve it will continue. The memorandum says 'Now, therefore, the Government of India, the Government of West Bengal and the GJM, keeping on record the demand of the GJM for a separate State of Gorkhaland agree as follows...' the creation of GTA.

The advantage we have with the GJM is the fact that they have not kept aside the demand of Gorkhaland and therefore we have to support them and make them victorious in this coming elections. If any other results follow then the authority of the GJM will be questioned by  both the governments and with that the legitimacy of the demand will also lose grounds, as they will have a point to prove that all the people of the hills do not support GJM and thereby the demand of Gorkhaland. Importantly this is what the West Bengal Government in general and TMC in particular wants to happen. What is there their strategy to make sure that such a calamity unfolds upon the people of the hills is to support JAP. 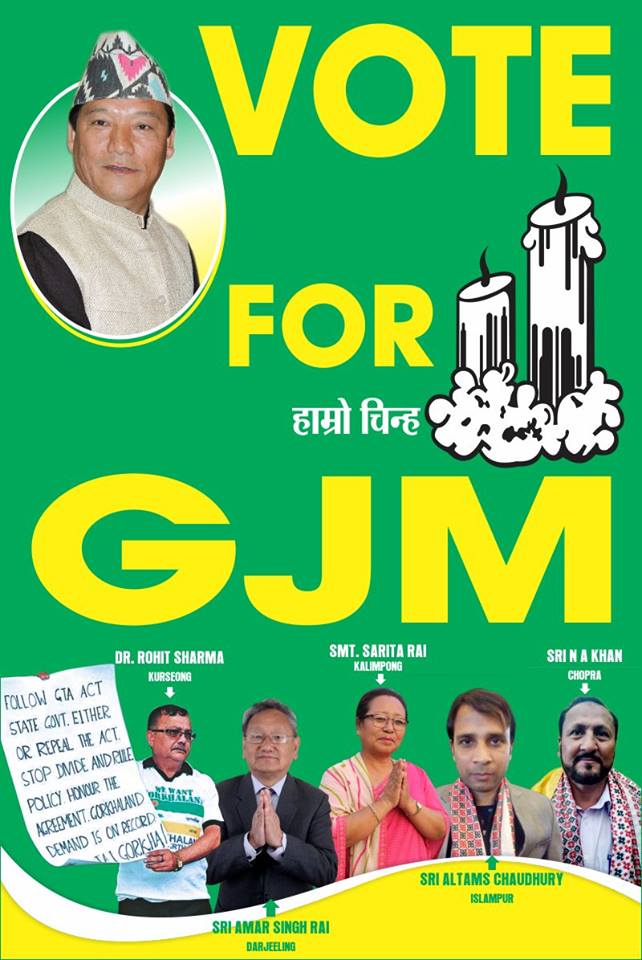 By now people of the hills have understood that JAP is in the 'front stage' only engaged in impression management. Their back stage needs to be understood. In the back stage, in reality, they are puppets in the hands of Mamata didi and their only objective is to see that they become 'Brutus' and stab the yearning of the people for Gorkhaland. Bimal Gurung has already been Julius Caesar and has already said 'et tu Brute' to the leadership of JAP when his direction to the party MLA to resign from the post of MLA was denied by none other than the face of JAP, Dr H B Chettri. Mamata Banerjee through JAP is only trying to create cleavages among the people of the hills and JAP have volunteered to be the instrument through which Mamata Banerjee can play her cards. Therefore, it becomes pertinent for the people of the hills to vote out JAP from the politics of hills. JAP has been further bolstered by the support of GNLF, another outfit who does not support the creation of Gorkhaland.

GNLF, has in the past, destroyed the hills. They were responsible for the death of many during the famed Gorkhaland agitation of the 1980s, the destruction of property and careers of many, only to achieve, constitutionally unrecognised DGHC. GNLF only was a fiefdom then, it is no better now. It is now in its lowest ebb, lacking in organisation, ideology, strategy, leadership and membership. They were dethroned by GJM and in its endeavour to take revenge on GJM it has compromised the wants and objective of the community. It has sided with TMC and JAP, two opponents of Gorkhaland. It has now become crystal clear that we have to fight together against the TMC, JAP and GNLF to uphold the glory of Gorkha community. This is a pivotal phase in our history, this election is not just another election for all the Gorkhas, it is the time to decide who we are, and what we cherish. It is the time to show all the opponents of Gorkhaland, that their false promises of development, district or for that matter anything is not going to distract us from our goal, Gorkhaland. Winning is not about proving the world wrong, but working together. So let us work together and ensure the victory of GJM in all the three constituencies and show the world that when it comes to the issue of Gorkhaland we stand united and no matter what the politics of the 'intellectuals' says we are behind GJM and those for Gorkhaland.