Home > TMC > TMC - GNL-JAP teams up for Joint Campaigning in the Hill.

TMC - GNL-JAP teams up for Joint Campaigning in the Hill.

A meeting was held at Darjeeling on 02 April on mobilization of joint campaigning for their chosen candidates in upcoming Assembly Poll which was attended by the Office bearer of GNLF, TMC and Jan Andolan Party JAP.

For the joint campaigining a committee too was formed for streaming task in respective levels to outreach mass.

GNLF has not fielded any candidates, it is suporting TMC and JAP.

With elections round the corner, leaders from Trinmool Congress, Jan Andolan Party and Gorkha National Liberation Front met yesterday in Darjeeling to chuck-out election strategy to defeat GJM in the upcoming legislative elections. 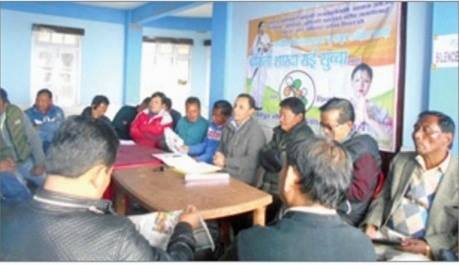 JAP, TMC and GNLF have decided to campaign at the grass-roots level together and reach out to the people from door-to-door in order to ensure win for Ms. Sarada Subba from Darjeeling, Ms. Shanta Chettri from Kurseong, and Dr. Harka Chettri from Kalimpong.