Home > Trinamool Congress > Why I am not voting for Trinmool, and Neither Should You

Why I am not voting for Trinmool, and Neither Should You

FRIDAY, APRIL 15, 2016 Much has been going on in the Darjeeling political scenario of late, for anyone remotely interested in politics these are an exciting time for the people in our region. We are literally spoilt for choices, issues range from the promised “development” to “Sikkim merger,” from formation of a “new district” to removing “corruption,” from ushering in a new era of “intellectual” politics to remaining steadfast in our quest for “Gorkhaland” statehood.

However of all the political parties in fray, I am confident that I won’t vote for Trinmool Congress, and I am hopeful that after reading my reasons for not voting for them, you will also reconsider your decision i.e. if you were planning on voting for them.

The obvious reason why people in Darjeeling, Terai and Dooars may not vote for TMC is because of their persistent stand against Gorkhaland. However, I don’t grudge them that. To be honest, CPI(M) and Congress are equally opposed to our fundamental demand, and so is Bengal BJP. Democracy is a number game, and no political party in their right mind would want to give up chances of winning 294 seats in the Bengal legislature and 42 MP seats by supporting Gorkhaland demand, which will at the most get them 6 MLA seats and 1 MP seat. In fact, it would be idiotic of TMC and every other party that hopes to make it big in Bengal not to oppose the demand for Gorkhaland.

My reason for not wanting to vote for TMC goes beyond the obvious. I am not voting for TMC for their utter disregard for the Gorkhali community, for undermining our very existence and for functionally turning us into a 2nd class citizen.
Here are some proof.

Disenfranchised Gorkhas
Politics is governed by one fundamental law and that is the “law of inclusion,” wherein the majority accommodate the needs of the minority, provide them with a level playing field, and most important of all treat them as equal. As far as TMC is concerned, we are disposable, and our lack of adequate voting numbers is perhaps the reasons why they have taken us for granted and continue to do so.

There was a time tested tradition, a political courtesy that every government of Bengal extended to the Gorkhas, that of sending in one Gorkha MP to the Rajya Sabha. Congress used to do it and CPI(M) honoured that tradition. Shri Dawa Lama and later Shri Saman Pathak – both Gorkhas – were nominated to the Rajya Sabha by CPI(M) prior to TMC taking power in Bengal. However, as soon as they came to power, the very first step that TMC took was to deny the Gorkhas our one representative in the upper house of the Indian Parliament.

Instead of sending a Gorkhali as Rajya Sabha MP, TMC chose to nominate KD Singh – a businessman of questionable antecedents from Jharkhand to represent us in the Rajya Sabha. 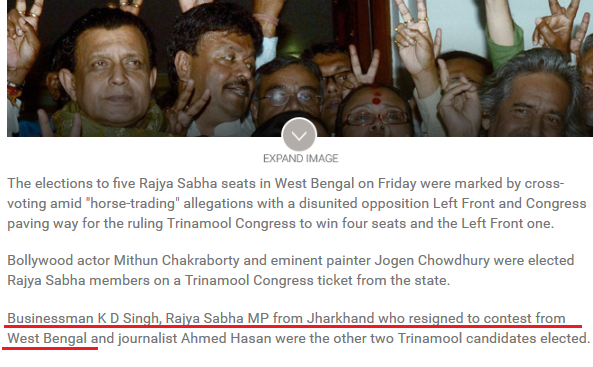 This despite the fact that Mr. KD Singh is the owner of Alchemist group that was already under investigation for Chit-fund like financial scam in Jharkhand. 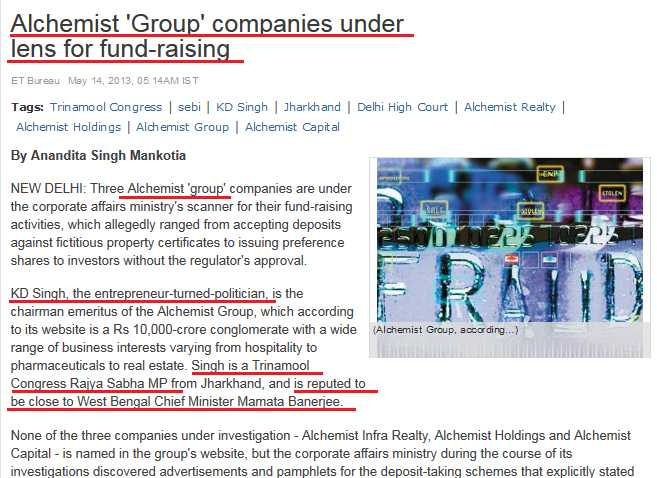 Tea Garden Woes
The same Alchemist group owns three tea gardens in our hills – Dhotrey, Peshok and Kallej Valley. This group which is worth over 10,000 crores hasn’t paid the workers in these garden their wages, bonuses or facilities that they are supposed to get.

They literally pushed over 2200 workers and their dependent family members in these gardens towards starvation. You can read the plight of the workers here http://bit.ly/23zILZy. Yet the Bengal CM and KD Singh’s close friend did not even utter a word of reprimand. This is how much she cares for our people. 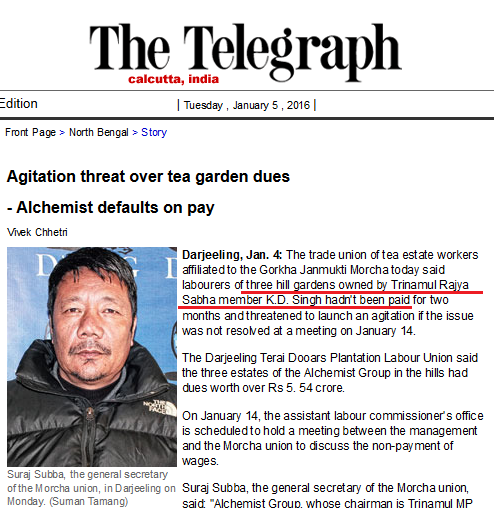 On April 13th, 2016 speaking at a public rally in Jalpaiguri, Mamata once again claimed that “no one has died of starvation or malnourishment in the tea gardens of Dooars during TMC rule.”

Nothing could be further from the truth as we all know. Over 1300 people have died due to starvation from 2011 to 2016 that TMC was in power, and many more are continuing to starve in the foothills of Darjeeling, Terai and Dooars. 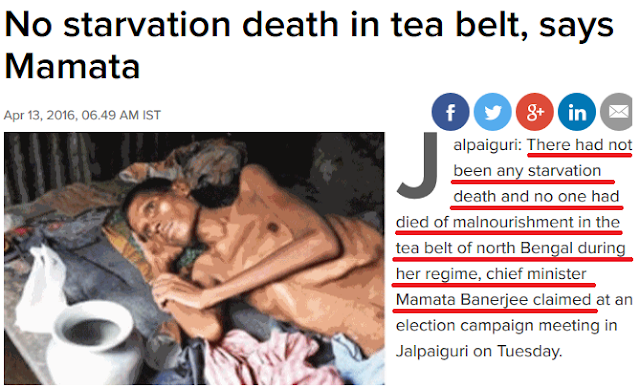 Yet she had the galls to stand in Jalpaiguri which is surrounded by starving tea garden workers and claim that “there have been no starvation deaths.” It would be akin to Hitler going to a Gestapo concentration camp in Nazi Germany and claiming that no Jews have been murdered.

Blood on Their Hands
The sufferings that our brothers and sisters working in the tea garden have to endure was made apparent, when despite repeated request for relocation of their village – Limbu Gaon following the 2011 earthquake, was ignored and denied. That earthquake had left a huge crater above the village and locals were worried that it could cause a landslide. All their please and requests landed on deaf ears of the Bengal government. Such was the gravity of the situation that on July 18, 2013 the Mirik Mirik BDO had written to his higher-ups, "As per field einquiry it is found fact that there is a huge landslide directly affected to the above said village... it is beyond the capacity of the establishment to protect the landslide affected area as desired by the villagers. YOU ARE HEREVY REQUESTED TO CONSIDER THE MATTER URGENTLY (sic)."  You can read the whole saga here with proof http://bit.ly/1Vt2N3B 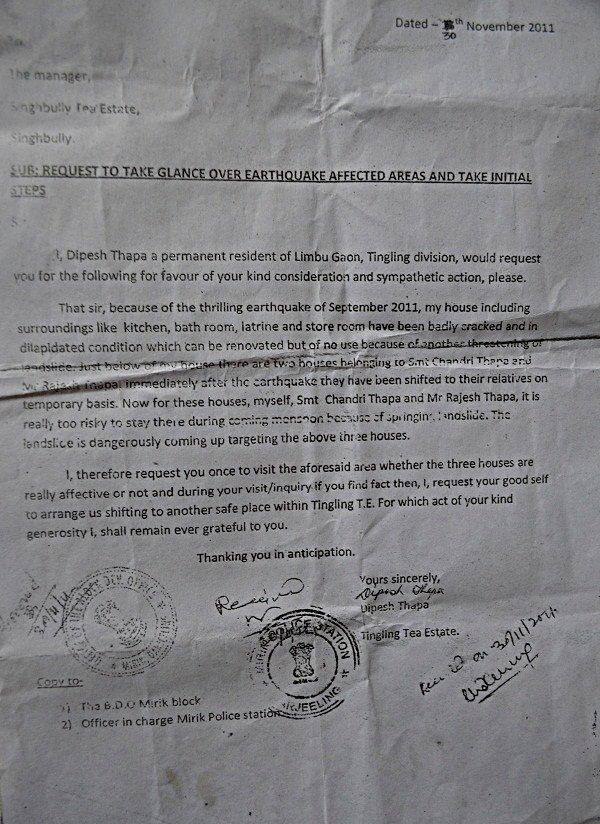 The worse fears of Tingling residents came true on 1st of July almost two years after this fateful letter requesting action from the then Mirik BDO, when landslide swept away the entire Limbu Gaon leaving 19 people dead in its wake.

What happened was not a tragedy; it was MURDER IN COLD BLOOD.
Following the tragedy, the survivors were shifted to make-shift relief camps, and the Bengal government promised immediate relief and rehabilitation. However almost 2 years after the tragedy people from Tingling are still not provided with land where they could shift to, remember the Land Rights are still being held by the Bengal government.
Out of desperation residents in Tingling staged a shut down demanding swift action towards relocating them, but their demands have once again landed on deaf ears.

Unequal Even in Death
More often than not we assume that no matter how rich or poor you are, death equals us all. Sadly for the Gorkhas, even in death we are unequal to rest of Bengal. When tragedy struck Darjeeling in the form of landslides and earlier earthquake, the Trinmool government announced a relief compensation of Rs 4 Lakhs per dead to the next of kin.

She even came to Mirik in person and handed over the cheques to the family of a few victims. But much like every other insincere action of Bengal government, even the cheques could not be cashed, as there was no money in the account from which the cheques had been issued [Details: http://bit.ly/1SaxgNy] that is how much Mamata actually cared for the victims. 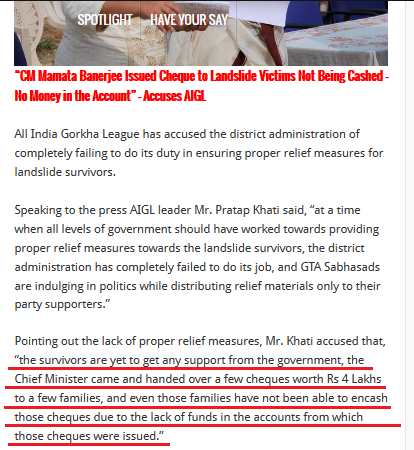 It is however ironic that the same AIGL that raised this issue today is happy supporting TMC in these upcoming elections.

Only two months from the fateful July landslides, another tragedy struck when a crane fell in Mecca Masjid in Saudi Arabia on Sept 2015, killing 107 people. Two Haj pilgrims who died that day were from West Bengal, and immediately Mamata announced a compensation of Rs 10 Lakh to the victim’s next of Kin.

I am not sure what makes the death of Gorkhas in the hills less worthy of compensation, than when someone died in Mecca? And this discrimination against the hill people was again made apparent, when tragedy struck in Kolkata recently and Mamata announced a compensation of Rs 5 Lakhs.

I wonder how long Bengal will continue to regard our people as less worthy even in death.

Mamata has carried on with the same indifference towards our brave-hearts. Recently when the mortal remains of two Martyrs Hav. Bhawan Tamang and Rfn Sunil Rai were brought to Bagdogra, no one from the Government was present to receive the dead-bodies or pay homage to them.

In other states Chief Ministers go to visit the families of the Martyrs, and even the Prime Minister takes out his time to share the grief as well as extend support to the family, however even a puny SDO was not present on behalf of the Government to receive the dead body of our Martyrs. This level of apathy and indifference doesn’t arise from lack of interest, it arises from utter disrespect towards our land, our people and our community.

Linguistic Imperialism
These are some of the most basic instances of discrimination that I have seen and faced personally, but nothing hurts me more than the utter lack of respect that Bengal government under TMC has shown towards our mother tongue Nepali. Despite repeated requests, West Bengal government did not see it fit to include Nepali as an optional subject in WBCS.

Our students are asked to speak and write in Bengali if they want job with the CSC and PSC. So much is the apathy hate towards our language that this is how West Bengal police wished us during Dasain... 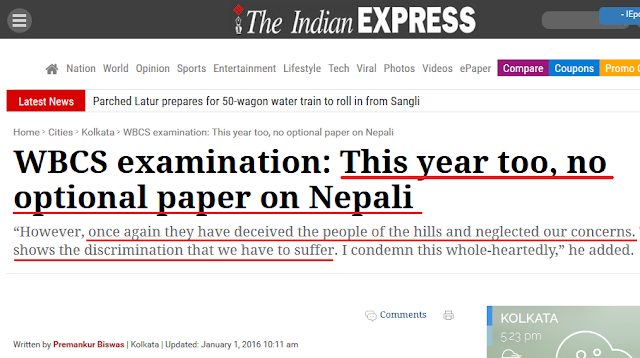 And when one of us pointed it out, his family and friends were harassed with repeated calls to report to the police station. You can know more about linguistic discrimination meted out against Nepali language here: http://bit.ly/1F2ctIN

Divisions
As if the discrimination against our language is not enough, TMC has actively sought to divide the hill populace along ethnic lines. By forming community specific “development boards,” handing over anywhere from Rs 20 crores to Rs 5 crores on her whims and fancies to them, Mamata has proven that she has no intension what so ever of allowing the Gorkhas to remain autonomous and united.

I feel ashamed that our own people are behaving like hungry DOGS and lapping up a few crumbs that she is throwing on our way. These “development boards” are nothing but TMC-proxy in our hills and through it Mamata has managed to create a huge rift among our own people. 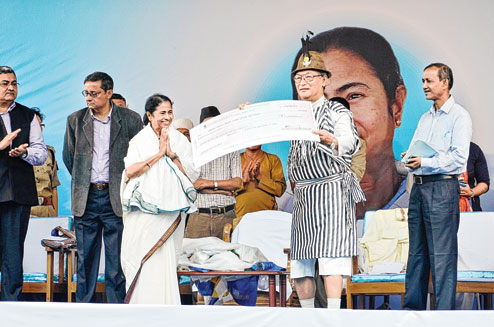 All of these may seem like small instances of oversight and realpolitik, but for me they are a rather elaborate web of wicked design that the TMC is weaving around us, and no thanks to “intellectuals” who have rushed in to support and seek support from TMC, their plans seem to be succeeding. We are allowing ourselves to be subjugated for our own selfish motives. What is happening in our region is nothing other than सौता को रिस ले लोग्ने को काख मुत्ने काम... Shameful and Self-destructive.

Unless we all send out our resounding verdict of NO MORE through our votes against the TMC and their Chela-chamundas, trust me that day is not far when we may continue to remain a Tamang, a Gurung, a Newar, a Kami, a Chettri, a Rai, a Chettri and so on, but will cease to exist as Gorkhas.

So please DO VOTE and make your VOTE COUNT...

Vote for keeping the hopes and dreams of our ancestors and our future generations alive. Vote to let Bengal know that they cannot buy out all the Gorkhas. Vote to let the sellouts among us know that they will not dictate terms to all of us. Vote to show the nation that the Gorkhas are united and we will always and forever cherish our freedom and self-respect over Bengal’s dominance.