MIRIK 28 May 2016 A singing talent hunt is being organised in Mirik for the first time ever in the history of the sleepy tourist destination in the hills.

The Various Artists' Association of Mirik will hold a two-day audition for the 'Mirik Idol-Sing for your Glory' on May 28 and 29. About 90 contestants from various corners of Mirik turned out for the

preliminary stage at the Tourist Lodge and were judged by a panel comprising Dipen Gurung (Darjeeling T-Idol), Anil Pradhan, Kailash Rai, Milan Rai and Bhawana Thapa. Nearly 45 or 50 per cent of the participants have advanced to the next round of the competition.

“I believe the competition will go a long way in providing a much-needed platform to the hidden talents of the region,” remarked Dawa Tamang, president of the association. 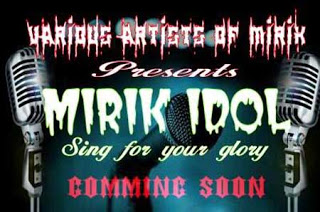 The two-day audition will also be held at the Tourist Lodge conference hall, followed by the second round at Soureni Community hall, third round at Byawasayee hall  and the final at the Donbosco School Auditorium.

"Mirik Idol-Sing for your Glory"

1. Only Nepali or Hindi songs will be entertained.
2. Time allotted for each performance is max. 4 minutes.
3. Participants are not allowed to refer any lyrical content while singing.
4. Participants are not allowed to sing on music tracks in Audition Round however, they are allowed to play guitar or any musical instruments.
5. Choice of song is open to the participants but the songs should not have any slangs or derogatory language.
6. There is no age bar to participate.
7. Only the participants from Mirik Circle (Including CHENGA, PANIGHATTA & DUDHIA) will be entertained.
8. Participants are required to submit their recent passport size (2nos.) colour photograph along with the photocopy of the following documents (any one) for address proof.
i. VOTER ID CARD
ii. AADHAR CARD
iii. DRIVING LICENCE
iv. RESIDENTIAL CERTIFICATE
v. BIRTH CERTIFICATE
9. Judges decision will be final.