Open Letter to Sikkim Chief Minister Pawan Chamling by Prateet Pradhan on behalf of the Gorkhas in Manipur for his statement about Indian Gorkhas.

Sir Chamling, you are an lone Gorkha CM in India and for that everyone used to be proud of you. Its democracy and you kept your words. But please let me keep my words too. Indian Gorkhas as told by you are all former soldier of Indian Army who later settled here. But i think its not the fact. Their are various Gorkhas dominated regions in India  which came to the Union of india through various historical events(From the than Nepalese Kingdom like Parts of Uttrakhand and also Sikkim through the Treaty Of Sagauli 1816). I am from Manipur and i called myself Manipuri and Gorkhali at a same time. Also, in my whole life i have not come across the term "So Called Gorkhas".

We may not be majority in our States but one thing is clear and that even our vote matters a lot. We are also good enough to elect our own representative. Their are various Constituencies in India (like Assembly Constituencies of Digboi, Margheritha, Sadiya, Tezpur etc in Assam, Kangpokpi and Sekmei AC of Manipur to mention a few apart from those within GTA) where the votes of Gorkhas matters a lot to decide the faith of an Representative. Even the recent election results of West Bengal and Assam gave us an example by electing 5 Gorkha MLAs. Still we are being called as minorities and the unity we sought are explained as an outcome of our Minority Status. 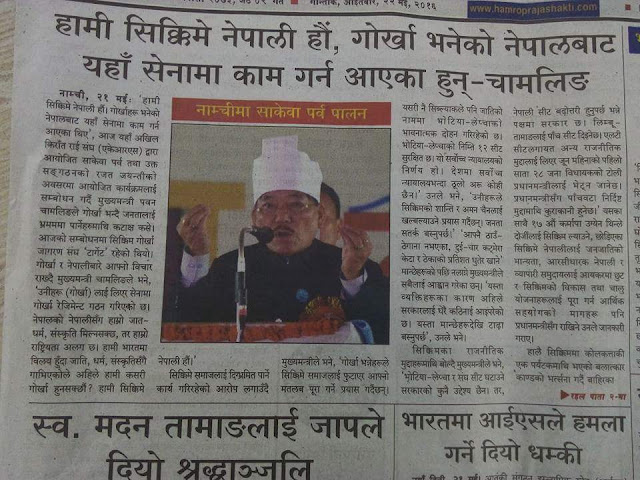