Kangpokpi Manipur , Jun.19 2016: Based on the anonymous quote, “Climb high climb far your goal the sky your aim the star”, MLA Nemcha Kipgen motivated Gorkha students to strive beyond the best they can be during the state level felicitation of meritorious Gorkha student at Kangpokpi. The state level felicitation program was organized by All Manipur Gorkha Students’ Union (AMGSU) at District Council Hall, Kangpokpi to felicitate the meritorious Gorkha students who had successfully passed the HSLC and HSE examination in first division under state and centre board.

MLA Nemcha Kipgen while congratulating the meritorious students inspired them to set their goals high and also motivated them not to stop till they achieved it. She also said that student community should avoid keeping their studies aside and taking part in other issues which are not related to their responsibilities and duties as a student. The MLA also emphasized the vital of parents particularly in acknowledging the goals or desire of their wards in molding their careers to become a responsible and respected person in the society while illustrating various examples of parents compelling their wards to pursue in the field which is opposite of their [the student] goals and desire which could ultimately leads to destructive consequences.
The felicitation program was attended by MLA Nemcha Kipgen as Chief Guest while Bhumi Prasad Basnet, Executive Member, ADC Sadar Hills and Shiva Kumar Basnet, Pradhan, 7/24 Kanglatongbi Gram Panchayat as Guest of Honour. While Ch. Birendra Kumar, Assistant News Editor, DDK Imphal attended as Resource person, Chonkam Kipgen, Chairman Kangpokpi Town Committee and Anil Kumar Dahal, President, All Manipur Gorkha Students’ Union attended as Special Guest and Functional President respectively.

Around 171 successful candidates in Class-X and XII examination under Manipur state and Centre board including 48 Class X and 30 Class XII students under CBSE and 79 and 14 students under BOSEM and COHSEM respectively who were awarded Certificate of Appreciation by the organizing committee. Meanwhile, highest percentage scorers in state and centre board, subject toppers and teachers were also felicitated during the function with Certificate of Appreciation and Memento. Ch. Birendra Kumar, 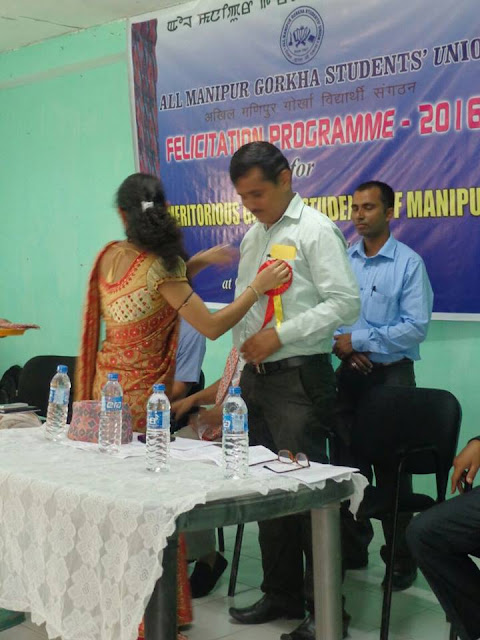 Assistant News Editor, DDK Imphal said while lauding the efforts of AMGSU in felicitating the meritorious students that it is important to first worship the teachers rather God, who imparted us good lesson and positive thinking while we are never sure of our creator. According to the Assistant News Editor, DDK Imphal, a best and an excellent teacher never give the right answer to the students but taught them [the student] the way to seek and find his/her own right answer. The Asst. News Editor further lamented that academic education is not that important and student do not need much academic education but it need more value base education while inspiring the student to chose their ways of life by their value base education. Bhumi Prasad Basnet, Executive Member, ADC Sadar Hills, Shiva Kumar Basnet, Pradhan, KGP, Chonkam Kipgen, Chairman KTC and Anil Kumar Dahal, President, AMGSU also spoke on the occasion and motivated the students in various aspects.