IMPHAL, June 21: Over 500 people have come together to promote talks between the Joint Committee on Inner Line Permit System - JCILPS and the JAC Against Anti-Tribal Bills, Churachand-pur, JACAATB to end the ongoing impasse and restore communal harmony between the different communities of the State.

Significantly the campaigners are drawn from different communities of the State and the petitions are submitted online on Change.org.

The petitioners produced ad verbatim the quotes from the JCILPS and JACAATB.
The Chief-Convenor of JACAATB H Mangchinkhup said : “There has been no initiative from the Manipur Government for any dialogue for the last 6 months. We are open to any dialogue with JCILPS.” 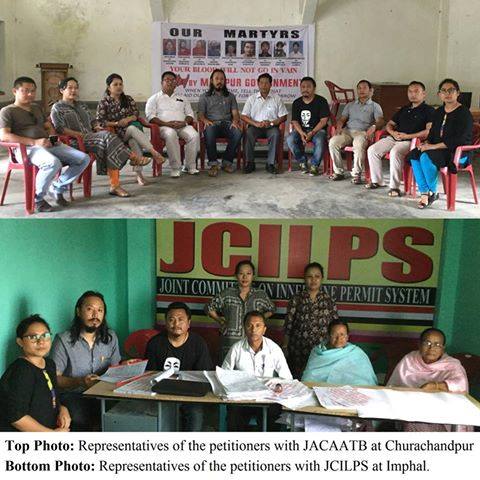 The Co-Convenor of JCILPS Md Kheiruddin Shah Moijingmayum said : “So far there has not been any initiative from Government of Manipur. Of course, want to go for a dialogue with JACAATB.”
One of the campaigners of the petition, Devakishor Soraisam is quoted as saying, “I was very worried about the present turmoil in Manipur, the growing distrust between the communities and the possibility of communal violence. I saw dialogue between the communities as the only way to ease this turmoil and bring about an amicable solution. I also saw that many people shared this same opinion, but our individual voices were not getting heard. Looking at this, I pitched this idea of a petition to my friends and jointly started this petition.”

Another campaigner, Ringo Pebam said, “We are not activists, we are not Civil Society Organisations, we are not influenced by the State or non-State actors, we are just common men like you and him and her, who see what we all see, and feel the urgent need for a dialogue between the spearheading committees of the hills and the valley for an amicable solution.”

Diana Elangbam, who signed the petition’s webpage in Change.org commented, “I am a daughter whose mother belongs to a tribal community and a father who belongs to the Meitei community and to my knowledge all I can say is that there has been a huge communication gap among the various communities of Manipur which can be solved through peaceful talks and this would be a great start.”
Another petitioner, Kenny Sialloa, said, “We have been living together for centuries. No force should allow us to live apart from each other.”

The petitioners are pinning their hopes on the two sides talking things over for peace.