Big shout out to Gorkhas daughter Ranjana Pradhan Rai from Darjeeling for being selected for "The Duke of Edinburgh's International Award". Over the past 60 years, The Duke of Edinburgh’s International Award has transformed the lives of millions of young people in 140 countries and territories worldwide. This year to celebrate their anniversary they've made 60 films of 60 seconds which tell the incredible stories of the Award from around the world.

About the The Duke of Edinburgh's International Award
The Award equips young people for life and work.The Duke of Edinburgh’s International Award is available to all 14-24 year olds and is the world’s leading youth achievement award. It equips all young people for life regardless of their background, culture, physical ability, skills and interests. Doing the Award is a personal challenge and not a competition against others; it pushes young people to their personal limits and recognises their achievements consistently. Since its launch 60 years ago, the Award has inspired millions of young people to transform their lives. Through non formal education, the Award can play a critical role in a young person’s personal development and is achievable by any 14-24 year old who wants to take up the challenge. 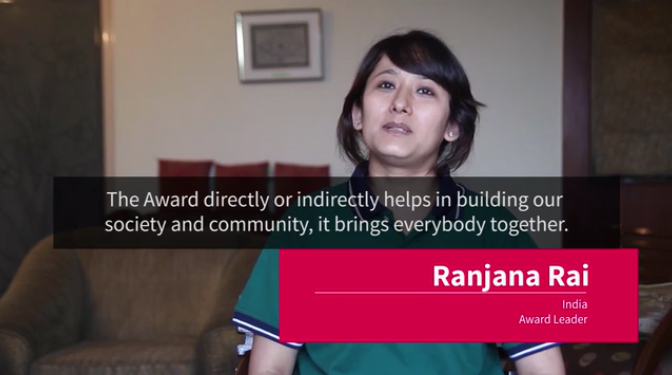 In her 1 minute film  “THE AWARD BRINGS EVERYBODY TOGETHER” Ranjana says the following:-

There is more in you than you think. The Award directly or indirectly helps in building our society and community, it brings everybody together.The award programe engages, equips and empowers young people. It equips them with essential life skill and it gives them a sense of responsibllity to give back to the community.Ever since I got involved with the Award itt has changed my life. It helps people practice democraccy in the true sence, because every individual involved with the award programme is free to practice and pursue what they wish to without cultural bias. And the prejudice in society that often occurs in small pockets are erased with the help of volunteers who reach out to people in a more sober through the award programme.