Home > West Bengal > Plight of Indian Gorkhas - have to decide what they really want?

Plight of Indian Gorkhas - have to decide what they really want?

The Indian Gorkhas have to decide now as to what they really want and where they want to go from here.

While India vies for a global position, various communities in the country are reasserting their roles and striving to get maximum mileage from the country’s global entry. Many of them have already devoured the political and development pie. Every community wants to be a player and a difference maker. The game is on. Meanwhile, more than 10 million Indian Gorkhas find themselves at the crossroads.

The Indian Gorkhas have to decide now as to what they really want and where they want to go from here. Should they go with the rest of India to compete at the regional, national and global levels? Should they reorient their community thinking, redesign their societal approaches and restructure their collective action? Should the younger generation ‘re-focus’ on education that will make them professionally competitive? 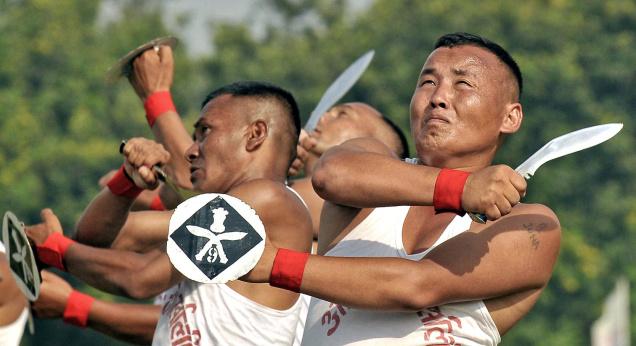 Can they afford to cling on to their Khukuris and be driven by emotions, while they have the capability to be an example of ‘knowledge generation’? They could use the same blood, sweat and tears to re-identify and re-position themselves as the gyan-vir (literally, knowledge brave) and acquire national leadership. They have done it in the past at an individual level and now they have to do it collectively as this path provides an entry into the club of a national entity.

All the flaws
The Indian Gorkhas are known for integrity, courage, resilience and perseverance. They have a rich culture, tradition and unwritten intellectual heritage. They have made immense contributions in almost all the fields of the nation-building process both in the pre- and post-independence period.

It is a historic folly on their part that nobody from them made an effort to deconstruct and reconstruct their history in independent India. Therefore, the historical narratives on them at the national level are biased or remain largely untold. Nobody wrote an exclusive history of the Gorkhas in India. —a shocking degree of intellectual-gap. This is where they failed. This is a major societal failure and a reflection of a self-centric political leadership.

The Indian Gorkhas have a distinct disadvantage in that they are scattered geographically all across the country. In terms of population, they are a minuscule lot. They are one of the least educated communities. Economically, they remain deeply downtrodden and have no national forum to champion their cause.

Their present political leaderships have been of sub-regional character with a myopic vision, which has failed them in every respect. They are ignorant to the core, marginalised by virtue of their background and acts, and highly self-centric. These leaders are seemingly full of emotions, hollow promises and dangerous instincts of self-survival. And, they do not count at the national level at all; they have merely become local lords.

As a result, the national image and power of the Indian Gorkhas have steadily eroded and been widely stigmatised. It has jeopardised the very future of the next generation. Some of them, like in Sikkim, have done irreparable damage by dangerously dividing the Gorkhas into different castes and religious entities. And the Bengal administration has only replicated this model in Darjeeling by creating ‘development boards’ based on caste and creed. This is the least expensive approach to kill the demand for a separate state. History will never forgive this retrogressive policy of these leaders.

Change in discourse
For a new future for the Indian Gorkhas, their steady entry into the policy and decision-making processes and institutions of the country is essential. Many of them have done it in the past in education, national security, sports, media, music, corporate institutions, literature and even politics. This is how a small district like Darjeeling produced 5-8 Olympic players, possibly a record in the country. However, as opposed to the trickle in the past, they have to join the India’s up-and-coming generation in hordes.

They should no longer overplay their weakest conventional excuse of “hepyo, chhutayo, atyachar garyo, apthyaro lagyo” (looked down upon, discriminated, persecuted, felt embarrassed). They cannot rise and fight with the spirit of someone vanquished. They cannot play outside the field and lament about discrimination to the referees of the game, the public. This amounts to using the weakest weapon against strong opponents.

Relatively successful Indian Gorkhas are emphatic: “If we are weak in knowledge and arguments, and shy away from competition, the story of discrimination becomes more about manko bagh (tiger within oneself) rather than banko bagh (tiger in the jungle).” India is a nation of innumerable communities, unparalleled geographies and diverse development stages along with a plethora of scattered democratic institutions. Thus, the Indian Gorkhas are left with only two choices: either to fall into the crevice or climb the mountain.

An example of poor choice is the discontinuation and refusal of ‘constitutionally provided’ Panchayati Raj institutions in Darjeeling since 1991 and the wilful acceptance of non-performing, capricious and cantankerous Darjeeling Gorkha Hill Council (1988-2007) and Gorkhaland Territorial Administration (2012), which was provided through a ‘gazette notification’ by a very hesitant and cunning state of West Bengal.

Rights under Panchayat Raj are constitutionally given to the people everywhere in India. Here the Indian Gorkhas sacrificed the Constitution of India for a mere gazette notification with hugely deleterious implications. What can be more paralysing and unfortunate that this?

However, they made a rational choice when they nationally fought for the recognition of the Nepali language in the Eighth Schedule to the Constitution of India in 1992. All India Nepali Bhasha Samity, Bharatiya Nepali Rastriya Parishad and many other institutions and individuals across India deserve kudos for this.

Playing the game
The scheduled castes, scheduled tribes and the other backward classes among the Indian Gorkhas have a distinct place and recognition in the constitution of India like others belonging to the same categories across the country. Yet, why do others succeed in becoming IAS/IFS officers in hordes and but the Indian Gorkhas hardly figure in the higher echelons of bureaucracy, governance and other national institutions? This is a tragedy that has been perennially repeated. Where is the discrimination? It is an open competition for all.

We see this so blatantly and remarkably when we sit in the Interview Board of the Union Public Service Commission to select government officers. The children from the hills are actually equally bright, quick, multi-cultural in thinking and have untapped competitive instincts. Yet they are nowhere in the competition. Who will tell the inspiring words of “timile garnu sakchhou” (You can do it!) to the young Gorkha children? Who will inject confidence and courage in them? Their confidence should be built better from the societal level.

The Indian Gorkhas have to rebuild modern institutions and revive the traditional ones that keep them united and vibrant. This is what we did while setting up and building a central university in Sikkim—an institution with a global perspective, national orientation and strong local ethos. The hope lies in the resurrection and active role of Gorkha youths to come together from across the nation and question their incompetent leaders. This requires a renegotiation within the pan-Indian Gorkha community, with a focus on the larger issues of aspirations of the youths and emerging national and global opportunities for them.