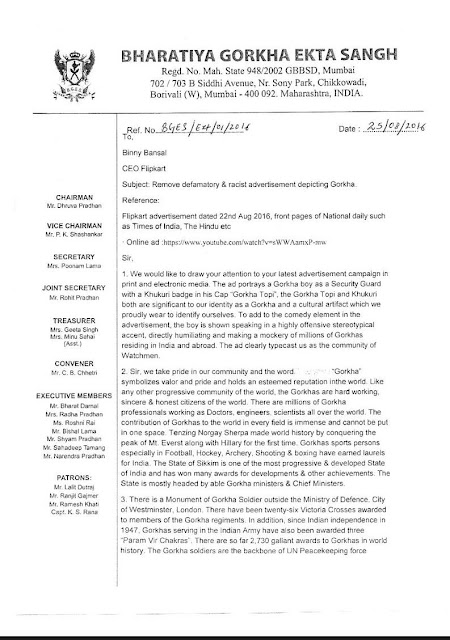 1.     We would like to draw your attention to your latest advertisement campaign in print and electronic media. The ad portrays a Gorkha boy as a Security Guard with a Khukuri badge in his Cap “Gorkha Topi”, the Gorkha Topi and Khukuri both are significant to our identity
as a Gorkha and a cultural artifact which we proudly wear to identify ourselves. To add to the comedy element in the advertisement, the boy is shown speaking in a highly offensive stereotypical accent, directly humiliating and making a mockery of millions of Gorkhas residing in India and abroad. The ad clearly typecast us as the community of Watchmen.

2.     Sir, we take pride in our community. The word  “Gorkha” symbolizes valor and pride and holds an esteemed reputation in the world. Like any other progressive community of the world, the Gorkhas are hard working, sincere & honest citizens of the world. There are millions of Gorkha professionals working as Doctors, engineers, scientists all over the world. The contribution of Gorkhas to the world in every field is immense and cannot be put in one space. Tenzing Norgay Sherpa made world history by conquering the peak of Mt. Everst along with Hillary for the first time. Gorkhas sports persons especially in Football, Hockey, Archery, Shooting & boxing have earned laurels for India. The State of Sikkim is one of the most progressive & developed State of India and has won many awards for developments & other achievements. The State is mostly headed by able Gorkha ministers & Chief Ministers.

3.     There is a Monument of Gorkha Soldier outside the Ministry of Defence, City of Westminster, London. There have been twenty-six Victoria Crosses awarded to members of the Gorkha regiments. In addition, since Indian independence in 1947, Gorkhas serving in the Indian Army have also been awarded three “Param Vir Chakras”. There are so far 2,730 gallant awards to Gorkhas in world history. The Gorkha soldiers are the backbone of UN Peacekeeping force responsible for maintaining peace anywhere in the world. The tune of the National Anthem “Jana Gana Mana” has been composed by a Gorkha, Capt Ram Singh Thakuri and the epithet is never ending and it continues…..

4.     Gorkhas are blessed with agile body & brain, simple & clean heart, speed of cheetah, Strong Character of honesty, loyalty & faithfulness, enjoys the unquestionable trust & confidence of the world. Because of trustworthiness & honesty, Gorkhas are in high demand for high profile safety & security jobs, like security of VVIP’s & Royal families across the world.


5.     So stereotyping Gorkha as a watchman through your ad is a big injustice meted to Gorkhas. Due to lack of knowledge about our Gallant History, rich tradition & culture, you have exploited and demeaned our customs and culture for your own commercial gain, which is utterly offensive and unethical.

6.     Here, we the Members of Bharatiya Gorkha Ekta Sangh (BGES), appeal to you to immediately remove such racist ads as the awkward performance depicted in your ads may propagate a racist attitude towards Gorkha community in India.