Darjeeling 10 Aug 2016 After the central committee of the Gorkha Janmukti Morcha rendered clarifications on its party president’s recent statement calling for an armed struggle, its youth front today  said a rally will be held on Thursday to spread awareness about the statehood demand.

Talking to reporters, Anil Rasaily, the Gorkha Janmukti Yuwa Morcha (GJYM) president from Tukvar constituency, said, “People are talking about the issue of Gorkhaland demand being diluted and forgotten. But we the youth want to send a message through tomorrow’s rally that the issue is still burning within us and that we will continue to strive towards achieving our dream."

Speaking at a meeting in Darjeeling last Sunday, GJM president Bimal Gurung reminded the gathering of the 1986 agitation and said the youths should talk about “khukuri” and arms. The GJM leadership  however, clarified the very next day that the party president’s statement was misconstrued. On Monday, GJM general secretary Roshan Giri and assistant secretary Binay Tamang said in a press meet that the party believed in “boudhik” (intellectual) agitation in pursuing the statehood demand. 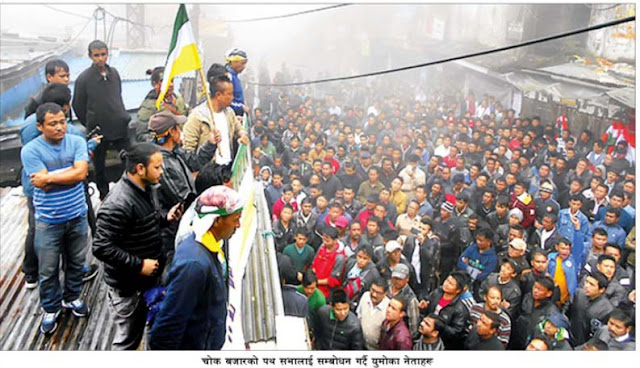 The statement was reiterated today by the GJYM. “Our struggle for a separate state will be an intellectual one. We want the youths to be aware of this fact and work accordingly towards our goal,” said Rasaily. Tilak Chhetri, the GJM town committee president, said youth activists were one-track when it came to the statehood demand. “We (youths) will remain sincere towards the statehood demand come what may. Lots of things have happened and are happening in the hills at present. But we never gave our consent to any kind of arrangements,” he said in reference to the party accepting the Gorkhaland Territorial Administration to end four years of agitation and the recent activities of other political parties.

Tomorrow’s rally will start from Tukvar, encompass the constituencies of Tukvar, Pandam-Phoobshering, Lebong-Badamtam and Sadar I and II, and culminate at Chowk Bazar in the heart of town  where a street meeting will be held. Youths from the town will join the rally in the Motor Stand area.