Gorkhas dissatisfied with Flipkart's response to protest of Racist Ad.

Indian Gorkha Community is highly  dissatisfied with Flipkart's response to their protest against Racist advertisement. In their note to Gorkha brother and sisters which they came up with after a case was filed in Delhi by the community they have simple given diplomatic clarification and have tried to justify their advertisement. Gorkhas want outright apology and taking down of the advertisement.

Seems like Flipkart and its controversies will never end. They come up with flagship sales event and are surrounded by controversy - Big Billion Day. Their app gets downvoted after net neutrality controversy, had to pulls out of controversial Airtel deal, Flipkart sends empty boxes to customers, They even delivers stones. The company have already come under ED scanner and what not? 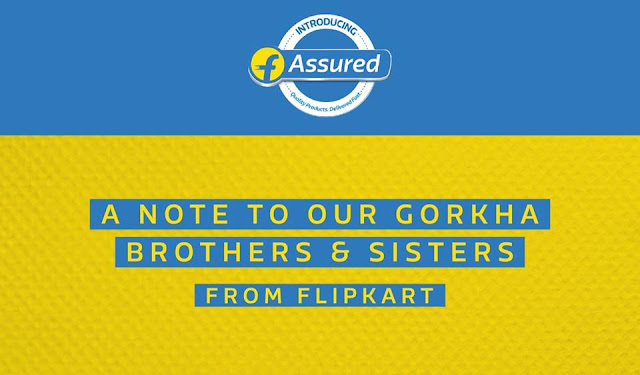 FROM FLIPKART, A NOTE TO OUR GORKHA BROTHERS AND SISTERS:

Last week we launched our new service ‘Flipkart Assured‘, a service offering that assures our customers of Quality Products and Fast Delivery. The service offering has been really successful. Lakhs of customers have tried Flipkart Assured since the launch and the feedback has been encouraging. You must have also seen the Flipkart Assured advertising campaign, featuring the famous “Flipkart kids”, which went live simultaneously and won love and appreciation from our consumers. The marketing and advertising fraternity also received it with positive comments.
Now, while we’re delighted with the positive response, we are aware that we may have unintentionally hurt the sentiments of our Gorkha brothers and sisters through the depiction of one of the characters in the advertisement, namely the security guard.
In that regard, we wish to share our point of view.

Foremost, we’re proud of and grateful to the Gorkha community. They symbolize valor, reliability, integrity and loyalty. Many members of the Gorkha community continue to represent our nation in the highest echelons of their chosen fields – be it administration, sports, defense, academics, entertainment, etc. Some of them have also chosen this profession of a security guard.

A security guard is someone we trust with our life. Every day. We trust our security guards to let the right people into our homes. We trust them with our children’s safety when they’re outdoors. We trust them to ensure that we sleep safe every night. The campaign drew from these codes of assurance to drive the key proposition of Flipkart Assured. It is with this intent that the character which the child portrayed was chosen to play the part.

Over the last week we have diligently pored over every comment and post on social and offline channels and discussed the issue with our customers to understand their concerns in depth. While most agreed to the freedom of creative expression and choice of characters, we discovered that the primary angst arose from the use of the Khukuri insignia (a respected and cherished symbol of pride and valor), and the tone of voice used by the character.

In line with the feedback, we have updated the advertisements to remove the depiction of the Khukuri and suitably changed the voices of the characters. The films have been uploaded on our social channels and will be progressively updated across all other channels in next few days.

Flipkart has always been an inclusive brand for people from all walks of life. We truly strive not to be the cause for anyone’s angst but be the reason for their happiness, irrespective of their ethnicity, nationality and strength of the community. We are fond of reflecting this in the stories we narrate and the characters that we bring alive. Our intent has never been to stereotype or typecast any community and hurt their sentiments in any manner. Rather, it has always been to celebrate the diversity and nuances that are unique to us as Indians.

We hope that our Gorkha friends will appreciate the updated advertisements, take note of the intent and extent of changes, and above all enjoy the innocent humor of the communication.

In reaction to Flipkarts above note, Ranjana Pradhan Rai, daughter of an Ex-Indian Army Officer wrote the following -

Dear FlippedKart...Opps! Flipkart & family, you seem to have not reached the point of Agenda raised by the gorkha community. Thus, you need a little more research & education on the correction of propogation in the advertisement. Perhaps, your mindsets fail to reach the very basic point questioned here, Why not a Gorkha Soldier? Thus, we welcome you for a cultural trip to Gorkhaland or Darjeeling to really understand what we mean and you can perhaps understand the fashion statements a little better too! Northeast does't require either your yarns or yearnings for Market YOU need. We have our own brands that unmatchably rocks!!!

So, when can we hear an genuine apology from your stakeholders as men of respect, who are expected to respond with egalitarian attitude. As your statement above clearly states that you associate Gorkhas as Chowkidaars or Guards when it comes to trusting the safety. We don't need such thankless recognition of the contributions our brave Officers & Soldiers have given to the very soil you have so comfortably parked yourself on. Perhaps, our great Cinamatographer Mr. Binod Pradhan could give you few lessons on how to touch hearts of people while filming appropriately, or I can do a better job than your copy editors or visualizers, but there's a price to my creative ability you might not be able to afford. So, muster up courage to a genuine apology instead of trying to gulp the choke and put your ego aside. Stop beating around the bush!!!

Sanjeev Pradhan another Indian Gorkha wrote - M/s Flipkart, whatever you have tried or trying to clarify the consequences through this text doesn't make any sense to forgive you. When you travel around the country, you won't find only Gorkhas as security guards everywhere. Instead you will find lots of security guards from other different communities. So portraying Gorkha in your ad is strongly condemnable. You should apologize in front of whole nation for your wrong concepts without any debates.

PPS I think I am rocking my Nepali topi.