The GTA chief executive had said on August 18 that he would quit the hill body "in the next two to two-and-a-half months" and start an agitation for a separate state.

Gurung had told a news conference that he was making the statement without consulting other GTA Sabha members or the central committee of the Gorkha Janmukti Morcha.

Asked about Gurung's statement, Mamata said at Sukna today: "This is just a political gimmick because whenever an election approaches in the hills, such announcements are made, as if they are opting for a voluntary retirement scheme. Municipality elections are due in January or February next year in the hills. Panchayat polls are also scheduled for that time, after which election to the GTA will be held."

During the last phase of the Gorkhaland movement in 2013, Gurung had resigned as the chief executive of the hill body on July 30 but again assumed office on December 26 the same year.

Gurung had repeatedly been saying at almost every public meeting that he was not interested in any position. "If I was bothered about the GTA chair, I could have developed a very close relation with the state government and lived comfortably," Gurung said on August 18.

Mamata said today that there was no place for armed movements in a democracy. She said any armed movement in the hills would be dealt with according to the law.

"I am always in favour of development and against any armed movement. But it is under some influence or sometime even with the help of Delhi that such issues are raised, which I think common people of the hills will not support. So many tourists are expected to come to the hills during Durga Puja and Diwali, which will help generate income for traders and residents. In case there is an armed movement, the law will take its own course," she said.

Gurung hadn't said yet that he would launch an armed movement for Gorkhaland.

Asked about the kind of agitation he had in mind on August 18, the Morcha president said: "The type of agitation, its form, everything will be known as and when it is decided."

Addressing a public meeting in Darjeeling on August 7, the Morcha president had urged the hills youths to "talk their hearts out", making an indirect reference to a movement.

Today, Mamata didn't refer to any of those statements by Gurung.

"There are so many talented people in the hills. They should come forward and take part in the development of the hills, which are lagging behind in growth by more than 25 years. We are discharging our duties and responsibilities. If we get a chance in future, we will make the hills prosperous," said Mamata. 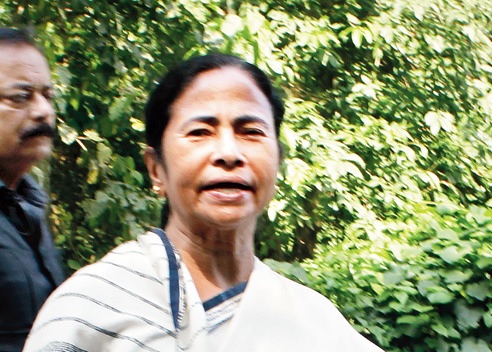 Mamata said she might visit Kalimpong in September. "There is an annual programme of Lepcha community in Kalimpong and apart from that, Kalimpong will be a new district. Keeping these things in view, I may visit Kalimpong next month," she said.

Asked about Mamata's comments: Morcha general secretary Roshan Giri said: "It is our right to decide when to resign or not. We don't need to seek permission from Mamata Banerjee in this regard."

He went on: "The demand of Gorkhaland has not been dropped and this has also been mentioned in the memorandum of agreement of the GTA. It is our constitutional and democratic right to demand Gorkhaland. Our agitation will be peaceful and democratic in nature."

Referring to Mamata's statement that municipal and panchayat polls would be held simultaneously early next year in the hills, he said: "We believe in democratic processes. Regarding, panchayat elections, it has been mentioned in the GTA agreement that a three-tier election will be held in the hills. We will welcome the three-tier election as we want the state government to honour the GTA agreement."