Darjeeling, Aug. 24: Bhupendra Pradhan, a founder member of the Gorkha Janmukti Morcha and the GTA chairperson, today joined Trinamul, blaming the hill party for failing to deliver on its promise of development.

Pradhan, who is better known as Pradip, joined the state's ruling party in the public meeting at the Kurseong Motor Stand in the presence of Trinamul minister Aroop Biswas.

Pradhan said his decision to join the Trinamul was to ensure development in the hills, particularly Kurseong. He accused the Morcha of failing to carry out any development work in the past four years.

The GTA elections are expected to be held around July 2017. The Morcha today decided to expel Pradhan.

The hill leader arrived at the venue in the car of Biswas, who is Trinamul's observer for north Bengal. 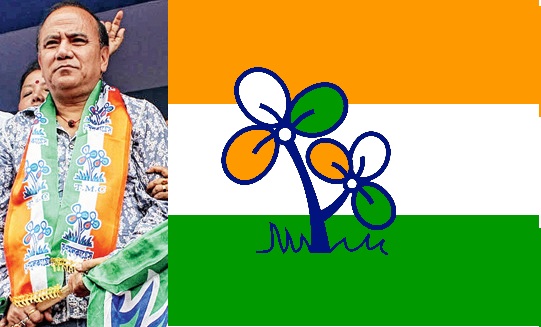 He said the Morcha leadership was not sincere about the Gorkhaland demand and added that if a sincere leader comes ahead for statehood, he would definitely support the demand.

"In the past four years, we have been able to do nothing for the hills. I have had a talk with Mamata Banerjee and she has promised to look into issues related to the development of Kurseong. I have also raised the issue of granting district status to Kurseong. I am confident that with the TMC, there will be development here," Pradhan said.

He, however, said that if development was not ushered in even by Trinamul, he could think of leaving his new party too.

Pradhan accused the Morcha of corruption, saying some party leaders "did not have the means to even buy a good brand of cigarettes" but now "when they go to Bagdogra airport they enquire about the cost of a helicopter run by the Sikkim government. Where has this confidence come from?"

At the sidelines of the meeting, Pradhan said Bimal Gurung would not resign from the GTA as he had recently threatened. "He will not resign, note it down, as there is money in GTA," Pradhan said.

Pradhan said in the next three months, the Morcha will have "only 20 per cent support" in the hills.

Morcha to oust Pradhan
The central committee of the Gorkha Janmukti Morcha today decided to expel Bhupendra Pradhan, popularly known as Pradip Pradhan, who switched to Trinamul today, from the party.

Soon after the central committee session, the GTA Sabha members met at Gorkha Rangamanch Bhavan and submitted a written request to the GTA Sabha vice-chairman, Lopsang Yolmo, to convene a special meeting where, sources said, they would seek the removal of Pradhan as the GTA chairman.

The meeting is likely to be held on August 26.

Morcha general secretary and the GTA Sabha member in-charge of education, Roshan Giri, said: "At the central committee meeting, we discussed the Gorkhaland issue. The party has also decided to expel Pradip Pradhan from the primary membership."

A source in the GTA said: "According to Section 37 of the GTA Act, a special meeting can be requisitioned by one-third of the Sabha members and once the vice-chairman convenes a meeting, the chairman can be removed by a resolution adopted by a simple majority of the total number of elected members of the GTA Sabha."

There are 45 elected members in the GTA Sabha.

The Morcha has also decided to hold a public meeting in Kurseong on Sunday.

According to sources, the move is an attempt to boost the morale of party cadres in the area and counter the Trinamul gathering where Pradhan switched allegiance.

Today, around 300 voluntary teachers, who were members of the Janmukti Insecure Secondary Teachers' Organisation (JISTO) Movement Committee, burnt the effigy of Giri here before resigning from the Morcha.

The hill party had disbanded the Movement Committee last month after some of the members had criticised Giri alleging that he had not been working towards regularising the jobs of the 500-odd voluntary teachers in more than 120 schools across the hills.

Amit Gurung, the co-ordinator of the erstwhile Movement Committee, said: "We burnt the effigy of Roshan Giri today. Around 300 members have resigned from the party. We will soon meet chief minister Mamata Banerjee and decide our future course of action."

The teachers have decided to remain apolitical at the moment, sources said.

Told about the development, Giri said: "If by burning my effigy, their jobs are regularised, they are most welcome to burn my effigy everyday."

Satyam Lama, the president of the Vidyarthi Morcha, said: "Our hunger strike is a message that our agitation is democratic in nature. We demand that the Centre open a dialogue on Gorkhaland and efforts be taken to constitute a committee to look into our demand."