23rd Sep 2016 Darjeeling Gorkha Janmukti Morcha (GJM) chief Bimal Gurung has threatened to go for a bandh in the Hills on 23 September if Bengal Chief Minister Mamata Banerjee fails to give detail break up of this Rs 4000 crore which, according to the chief minister, has been given to the GTA.

"You carry forward several development schemes which you have already taken up. Our government will give money for such schemes. Don't worry for money. You just go ahead with your goals for developing the Hills," the chief minister Mamata Banerjee said, making it clear that her government would not allow any disruption in the ongoing development in Darjeeling.
"Yesterday, she had announced that her government has given Rs 4000 crore to the Gorkha Territorial Administration (GTA). We want a detail break up of this Rs 4000 crore which, according to the chief minister, has been given to the GTA. If the chief minister Mamata Banerjee fails to give any break-up by September 27, we will go for bandhs in Darjeeling from September 28," Gurung said on Friday.

According to a PTI report, GJM chief Bimal Gurung said that CM stated that Gorkhaland Territorial Administration (GTA) was given Rs 4000 crore by the state government and that the CM should give details of the money spent. 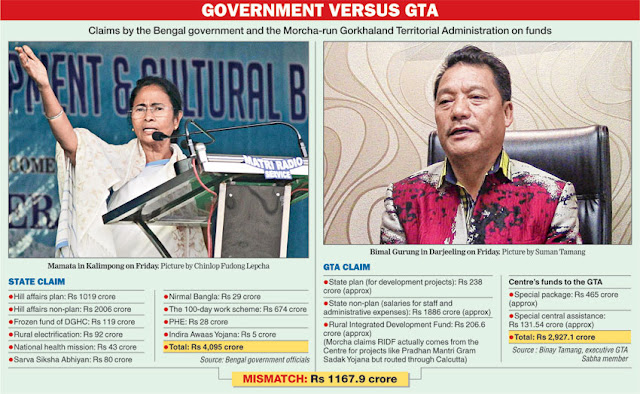 "Let her give the details of the amount by 27 September. Failing which we will call a bandh on 28 September," he said.

"The state government is forcing us to call a strike," Gurung said in Darjeeling around 1pm today. "An atmosphere of agitation is building up in the hills. Tourists should check the situation before making their travel plans," he added.

Around two hours later in Kalimpong, Mamata said she would not allow any shutdown.

"There will be no bandh. We will not allow negative and disruptive politics," Mamata said, before specifying why tourism was so important for the livelihood of the people in the hills.

Following the call for bandh, Mamata threatened that her government will not allow any bandh in the Darjeeling Hills and will resist any attempts to disrupt the development activities in the region.

Banerjee said that instead of working for development, they are indulging in politics.

"We want peace in hills. We will not allow violence. Enough is enough. We must work for development. We have developed Lamahatta, Mirik, Tiger Hill, Lava Lolegaon. But they want to destroy it all by violence," she said.

"We will not stop the process of development in the hills. We want people to get employment. We are here to address the issues of the hills. If the hills smile, we will smile," she said.

Gurung - already reeling from a spate of defections from the Morcha to Trinamul - said today: "It is not good for a chief minister to speak in excitement. She has given us Rs 238 crore for the development of the hills in the past four years and now, she claims that she has given Rs 4,000 crore. Even if she includes the salaries of staff and administrative expenses, the figure is a lie," said Gurung.

Amid the debate on whose numbers were right, Gurung issued the strike threat, first call of the kind from the Morcha after more than three years. The last phase of the shutdown went on for a month till September 10, 2013, over the Gorkhaland demand.

He took care to explain the two other reasons behind the strike call - increasing interference in the affairs of the hills by the state government and an alleged attempt to divide the community.

Although Morcha leaders tried to stress that the main reason behind the strike call was to expose the state government, an official said the threat was an indicator that Gurung was getting increasingly restless with the turn of events.

"He is realising that he is losing control over the hills and the strike call is a desperate attempt by him to remain relevant. The state government would not let the strike happen and a confrontation is imminent," said the officer.

To start with, the Trinamul Congress is gnawing at the Morcha's support base by forming development boards.

During the last Assembly elections, the Morcha's winning margin in the three hill constituencies fell by 68.5 per cent, compared to the 2011 results

"The civic and panchayat elections will take place in a few months. Of the four civic bodies in the hills, we are comfortably ahead of the Morcha in Kalimpong, Kurseong and Mirik. Didi has endeared herself to the rural people in the hills through repeated visits. Gurung is doing all this to retain his turf. He is scared," said a Trinamul insider.

According to him, Gurung is aware that the GTA would become redundant if Trinamul performs well in the civic and panchayat polls as major government projects could be carried out through these elected bodies.

The GTA has already become a fringe player in the hills as the state government is using the development boards to shower benefits on various communities. Today, Mamata handed over a cheque for Rs 10 crore to the Tamang body to build houses for the poor before inaugurating a youth hostel.

"All the development boards are with us. Harka (Bahadur Chhetri, a former Morcha leader) is with us... Bharati Pradhan is with us. Ghisingh's son is with us. We have the support of the hills," said Mamata.

Tomorrow, Trinamul will deal another blow to the Morcha as PWD and youth affairs minister Aroop Biswas will preside over a programme, where hundreds of Morcha supporters would join the ruling party.