The first ever International Nepali Poetry Festival was held yeaterday at the South Asian  University (SAU), New  Delhi yesterday.  The one-day  festival  was organised by Nepali student community of the university, in collaboration with the university’s  Institute  of South Asian  Studies (ISAS) and book  club. The poetry festival was supported  by  the BP Koirala Foundation under  the  Nepal  Embassy  in New Delhi.

The  programme  began with  Dr.  Kavita  Sharma,  President,  SAU,  welcoming  all guest  and  participants.  She shared her  vision  of  South  Asia and underscored the  importance  of poetic  exchanges  between  countries in  the  region. The  Nepali Ambassador to India, Deep  Kumar Upadhyay applauded the efforts of the organising team for their efforts and encouraged the participants to engage themselves more in such events in future.

The  festival  proceeded  to  explore  poetic  imaginings in Nepal and  India through  a  conversation between Professor Abhi Subedhi, renowned writer  and  critic from  Nepal, with  Shri Ashok  Vajpeyi,  poet and  former  Chairman  of the  Lalit  Kala  Akademi of India. Featured were  panels  on  South-Asiaism - first  on  the  various South  Asian  translations of  Pablo  Neruda’s poems and  later  on  feminist  writings in  various languages  of  South Asia:    Bangla,  Daree,  Hindi,  Urdu, Sinhala,  Tamil,  Telugu  and  Nepali.

The session  was  followed  by  the  discussion  on  Nepali  session  which was  the  major  attraction  of the festival. The  Nepali session  began  with the  discussion  on  ‘Nepali  Poetry  outside  Nepal’ by  the  panelist which included noted  poet  Dr.  Rajendra Bhandari  from  Sikkim,  Daibaki Timilsina  from  Assam, and  Raja Puniani from  Darjeeling. The  second  session of the peotry festival focused on the discussion of various  aspects of Nepali poetry  by Bhupinder Adhikari  from  Dehradhun,  Madan Puskar recipient  Ram  Lal Joshi from  Nepal and  Sukul  Pradhan  from Delhi.

Later on, Vishnu  Gurung  from  All  India Radio,  Dr.  Naba Raj  Lamsal from  Radio  Nepal, and  Jogen Darnal from  Darjeeling  expressed  their  views on  ‘Poetry  in  Media and  Academia’. The  invited panel guests enthralled the audience with their captivating poetries that focused on different issues and themes.

Sarubhkata  Shrestha, the Chancellor of Nepal  Academy  of  Music and  Drama, delivered  the  most  awaited keynote  address  on  ‘Contemporary  issues  on  Nepali  Poetry.’

The twenty young poets who came  from  different  parts  of Nepal  and  India also entertained  the large  gatherings by  their poetry  recitation. Besides, there  were  also  video recitation from  different  parts  of the  world, including China,  USA,  Israel,  and  Norway. The  program  was streamed live through DC-Nepal and was coordinated by Ram N. Shrestha and Krishna Sharma. 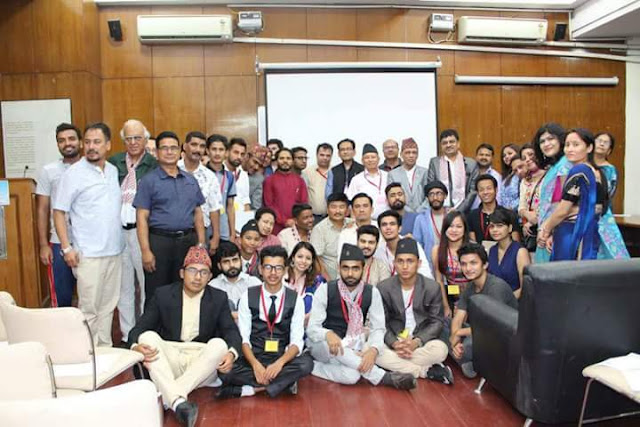