Mirik, June 5: Mamata Banerjee today said Bengali would not be compulsory at schools in the Darjeeling hills and in certain areas of the Dooars and the Terai.

The chief minister's about-turn is perceived to be aimed at meeting the twin objectives of soothing the frayed nerves in the hills and retaining the advantage Trinamul had made in recent civic polls.

Despite Mamata's announcement, the Gorkha Janmukti Morcha said it would continue to hold processions across the hills till June 8 on the language issue.

Mamata made the announcement at a government programme here amidst an agitation launched by the Gorkha Janmukti Morcha on the language issue.

"Some persons here are playing politics and trying to divide people. The GTA elections are ahead and as they lack a proper issue, they are spreading rumours. We want to make it clear that Bengali will not be a compulsory language in the hills and in some parts of the Terai and the Dooars," Mamata said.

After the state government had made public its plan to make learning of Bengali compulsory at schools, Mamata and education minister Partha Chatterjee said the decision would be applicable to the hills as well.

However, the chief minister made a U-turn in Mirik today and said Bengali would be the fourth language in the hills.

"If Bengalis can read Nepali, then why can't Gorkhas read Bengali? We want to keep Bengali as an optional language as students in the hills need to know Bengali. In due course, when they will move out to other parts of the state for jobs, this learning will help them. It will be an optional language here," she said.

The change in the decision, observers said, was necessary to ensure that the hills did not shun Trinamul that had just won Mirik municipality and some seats in three other hill civic bodies.

"The decision had led to protests in the hills and the Morcha that was a bit upset after losing Mirik to Trinamul got a pertinent issue to revive its support base. After today's announcement, the situation has again become favourable for Trinamul," an observer said.

Mamata also said the state government would audit the spending of funds by the GTA that is administered by the Morcha. 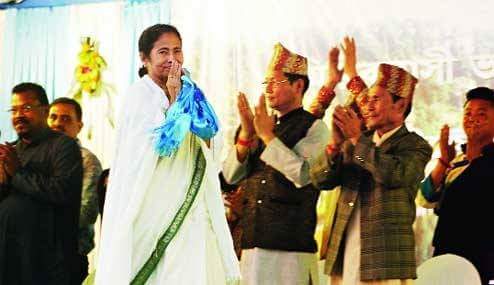