Taking strong exception to the filing of FIRs against Sahita Academy Award winners and heads of reputed schools in the hills by the police, Darjeeling MP SS Ahluwalia has written to PM Narendra Modi asking for his "immediate intervention to ensure that people of Darjeeling as well as North Bengal are saved from the draconian emergency-like measures undertaken by the Mamata Banerjee government."

Here is the text of the letter released to the Press by his office...

I am writing this letter to you in great anguish and in great urgency from Oslo, as I feel that your intervention is immediately needed to ensure that people of Darjeeling as well as North Bengal are saved from the draconian emergency-like measures undertaken by the Mamata Banerjee government to stifle the voices of dissent being raised in Darjeeling hills, Terai and Dooars against her repressive and arbitrary order q.

On 16th of May, 2017 West Bengal Chief Minister Miss Mamata Banerjee announced that Bengal would adopt a three-language policy and that Bengali language will be made compulsory in schools. Miss Mamata Banerjee had posted on her Facebook profile that “If the student chooses Bengali, Hindi, English, Urdu, Gurmukhi, Nepali, Alchiki as a first language, he/she may opt for two other languages of their choice. One of the three languages would have to be Bengali. The two other choices are completely dependent on what the student chooses.”

In the Darjeeling hills, Terai and Dooars most students opt for Nepali/Hindi as their first language and English as the second language and those inclined to learn more languages opt for Hindi/Nepali as their third language. Students who want to learn Bengali are allowed to do so with no hindrance whatsoever and every year almost all the schools across the hills have students who complete their education with Bengali as their second language. However, making Bengali compulsory would mean that these students would not have any choice on which language they want to learn and their right to choose - a fundamental right under our constitution - is taken away from them.

Imposition of Bengali language even as a third BUT compulsory language will mean they have to forgo learning either English ( a language necessary for employment opportunities), Hindi (Our National Language, one that binds all people of this Nation together, as well as being a language for opportunities throughout India) or their respective mother tongues ( the language that binds people, especially those from the minorities, with their identity, history and culture, and without which, they are put on the path of losing their link with their heritage) , sacrificing it in favour of the Bengali language.

Following this, the linguistic minority communities within Bengal started to voice in their dissent and questioned the intent of such a move. Among the linguistic minority communities who live in Bengal, the Darjeeling hills, Terai and Dooars is home to one of the most linguistically diverse regions in India. Among three major non-Bengali communities who live in these regions, Nepali, which is one of the recognized National Languages of India under the VIIIth schedule of our Constitution, is the lingua franca of the Gorkha community; Kamtapuri is the mother tongue for Rajbanshi community; and, the Adivasi community in my region speak Hindi, Kurukh, Sadri, Santhali, Nepali, and other languages/dialects.

On the 30th of May, 2016 the Gorkha Janmukti Morcha, which is a valued alliance partner of National Democratic Alliance, held a “Samiksha Sabha” to discuss the implications of compulsory imposition of Bengali language. This meeting was attended by eminent personalities from the Nepali academia, including Shahitya Academy Award winners Shri Jiwan Namdung and Shri Prem Pradhan, representatives of top schools in the hills, like St Paul's School, St Joseph's School (North Point), St. Roberts School, Vidhya Vikash Academy, among others, along with Shri Bimal Gurung, President of the Gorkha Janmukti Morcha and Chief of the Gorkhaland Territorial Administration. The meeting concluded with these eminent personalities opposing the compulsory imposition of Bengali language among the linguistic minority communities, and they agreed to register their protest by calling for a two day voluntary closure of educational institutions (on 1st and 2nd of June) in the Darjeeling hills, Terai and Dooars region.

The bandh, I have been informed has been completely voluntary, peaceful, and thus successful today.

In retaliation, the Darjeeling District Administration at the behest of Chief Minister Mamata Banerjee has, however, filed an FIR against all the eminent people who had attended the meeting on May 30th. The FIR registered by the Inspector-in-Charge of Sadar Police Station, Darjeeling, Shri Saumyajit Roy, alleges these good people of “conspiring against the state.”, and carries the corresponding. relevant sections of the IPC.

My constituents fear that filing FIRs against these eminent personalities is just the beginning of an oppressive, authoritarian, despotic, and tyrannical regime unleashed by the Bengal government through the district administration to stifle the voices of concern and love for one’s mother tongue.

Sir, given all of the above, I humbly request you to kindly intervene and help to ensure that the rights and freedoms enshrined in the Constitution of our nation, which are guaranteed to people from every part of West Bengal, along with the rest of the nation, are not trampled upon by Mamata Banerjee led government in West Bengal.

I urge you to help my constituents in raising their voice against such draconian and dictatorial measures adopted by the Bengal government by extending your solidarity and support to them.

I look forward to your kind support and earliest intervention. 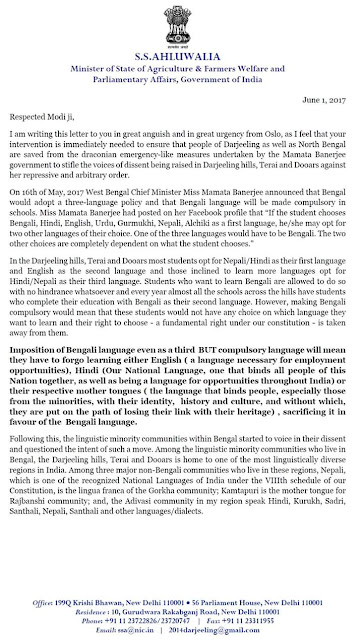