A statement of solidarity from Gorkha Students, JNU to the protesting tea garden workers for their minimum wage

All tea workers unions from Darjeeling, Dooars and Tarai under the broad banner of Joint Forum have decided to go for a 48 hour strike in Bengal against the exploitation of tea garden owners of Bengal, who are living in deplorable condition with less than minimum wage which is insufficient to live a dignified life. It is co-incidentally at the same time when the people of Gorkhaland are struggling against the oppressive linguistic imposition of the Bengal government on the indigenous people of the land.  The Hills, Terai and Dooars of Gorkhaland are gripped in seething angst when it is forced to witness the misery of its own people in the form of hunger and starvation deaths. It is outrageous to see the workers of a multi-million industry (tea plantation) dying a slow and painful death due to hunger and starvation. The irony of this situation is lies in the presence of stark poverty, chronic hunger and exploitation along-side the colossal profits these tea-gardens generate for the owners and the State. According to an estimate by the Darjeeling Chamber of Commerce, tea industry in the hills generates an average of Rs. 450 crores revenue annually, equal to that of the tourism industry in the region. Absence of workers’ rights, non-payment of minimum wages and benefits is not specific to the tea-industry alone but is rather a persistent feature of work in the highly segment labour-market in India. However, it is pertinent to highlight here the starkly Regional Aspects of Discrimination that lies so strongly visible in the tea industry. The minimum wage paid to unskilled tea labour in Kerala is Rs.301, in Assam it is Rs.158.54, in neighbouring Sikkim it is Rs. 200 while the same in Darjeeling comes to a meagre Rs.112. Even the minimum wage paid in West Bengal for MGNREGA is around Rs. 130-151 and for agricultural laborer is Rs. 206 per day. The tea workers in North Bengal are thus made to work for wages which is far below the minimum in any form of work. It is very shrewd on the part of the owners to claim low wages are due to low price being earned from the sales of tea leaves produced from these gardens. If this be the case then why the wages of workers remains same in those tea gardens which fetches the highest price in the world tea market( for instance Rs. 1.1 lakhs per kg of tea is produced by Makaibari tea garden but wages remain still at Rs.112).
In the last decade more than 1400 tea workers have died due to acute malnutrition and starvation. As recent as January 2013, 95 workers of the locked out Dheklapara Tea Estate in Dooars sent a letter to the Chief Minister of West-Bengal seeking her “order” to kill themselves because they were suffering from acute starvation. The tea workers therefore are forced to languish till they die of hunger and malnutrition. Studies show that 70% of the people of the closed tea gardens suffer from chronic energy deficiency III stage. In the gardens affected by starvation death like Red Bank, Bandapani, Diana and Kathalguri tea gardens, it was found that workers and their families have Body Mass Index (BMI) identical to those populations affected by severe famine.
The starvation death in the tea gardens, the crushing of the identity of the Gorkhas and other minorities and the denial of basic rights to oppressed communities in Bengal has been a phenomenon for centuries in Bengal. The hegemonic forces are united to crush every single voice of dissent and so now the time has come that the oppressed be united to fight against this domination for a better tomorrow.
At this hour of crisis, Gorkha Students, JNU stands in full support with the tea garden workers and the Gorkha people in their struggle for dignity, self-respect and a better life. When Oppressors are always united and consolidated, it is a historic responsibility on our shoulders to unite and fight for a just and egalitarian society!
We also demand that:
1. Closed and abandoned tea estates be reopened immediately.
2. Stop privatisation of government operated tea gardens.
3. Declare and implement Minimum Wage for tea plantation workers.
4. Grant legal ownership of housing space to workers
5. Casual labour should also be brought under the purview of Plantation Labour Act, 1951.
6. Backlog of unpaid Provident fund and gratuity should be cleared without delay. 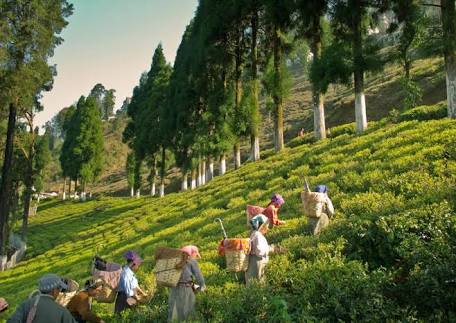