//The Butterfly Effect// by Merab Wangchuk

The last time I verified my identity as an Indian Nepali was a month back while traveling back to my hometown. She was a sweet kid, somebody I'm never going to meet again but I hope I got my point across that I'm an Indian as much as she is.
As a resident of West Bengal and studying in Kolkata, I have always had to clarify myself on my physical structure.

Yes, to you it is a beautiful place. To my people its their lifeline, a land forged to what it is now with their blood, sweat and tears. British overseers lorded over our ancestors as they slaved away, laying foundations for the very same places you come to see, the very same places before where you take pictures and store it in albums as cherished memories, a cheap gateaway, a summer destination, a place where for a while you forget your daily hectic days and lose yourself to the blowing of cool winds, blue hills, orange sunsets and the sparkling mirror of Khangchendzonga.

No, I have nothing against you. Infact, we have always been welcoming and happy to have you here. But what bothers me are the hateful comments being spewed out in social media and news channels. So much of hatred and racism being spread about not only from other communities but from my community as well. Do you know how saddening that is? To see our stance degrading, to have to stoop so low.

History has it that this land had always been contested between the Chogyal of Sikkim, the kingdom of Bhutan, the kingdom of Nepal and the British East India Company. Wars have been fought for this land, treaties have been signed for this land, annexation is a word this land understands all too well. It all shows that we have existed here since long, saw it being destroyed and rebuilt, my people have lived their lives in oppression and poverty and still managed to build a home for themselves here.
So, why do we have to hear echoes of "GO BACK! GO BACK!"

And I ask you, "Where?"
You see, I've been asked to go back either to Nepal or to China but I know nothing of the two countries. What I call home is here. India. I have sung the National Anthem with as much pride as any other fellow countrymen, celebrated Independence Day with as much pomp and splendour as the rest of the country, I have believed in the Brotherhood of Men too strongly and fiercely and yet, sadly, as I walk the busy streets of a city I've called home for the past two years, along with the warm humid gust of wind, sprinkles of 'Chinese' , 'Momo', 'Ching Chong', 'Nepal challey jao' still follows my shadow.

However, I can't be despicable for there's always been somebody kind enough to give directions when I've gotten lost a few many times, friends so sweet and supportive, people who've made me believe in humanity again and again. So, tell me how can I detest an entire community? For you see, this is not a war between two communities, between ethnic groups, between the Nepalese and Bengalis, this is a war for an identity. The plea to be heard, to be given a place, a fight put up by a race of smothered people only asking to be recognized, to be able to live with heads held up high.

We have been branded foreigners, anti-nationals amd terrorists. We stand for peace but now, it seems a far thought. We know enough of tear gases, rubber bullets, gaping wounds and sacrifices. We are a race who have compromised enough so much so that the Teesta now lies dead and there is still no electricity in our homes.

Who isn't petrified of what is to come? There is an ominous foreboding in the air, maybe this will be our last effort, maybe if this fails, my people won't have the strength to rise gain but today, the wings are in motion now. Will we answer the call? Will we blow up a tornado or are we going to let it fizzle away from our grasp, yet again? 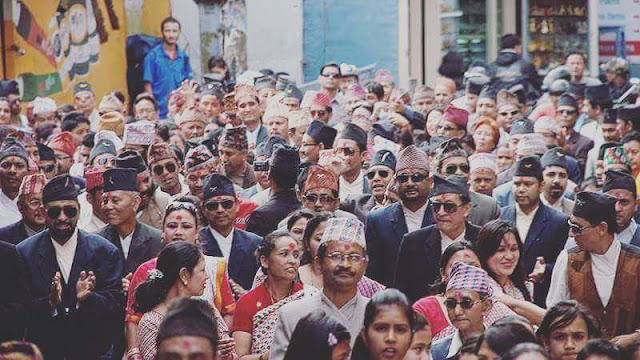