Successfully or unsuccessfully we have completed 100 days of indefinite strike over the hills without exemption or relaxation. Is this our success or failure! the question remain unanswered and hovering with different opinions or views (it might differ on politically, socially or personally); lets not make argument on it because it is a personal choice and personal freedom of evaluation of it.

Here, I just want to highlight some of the important issues or matter of concerns after observing our course of Gorkhaland agitation in the hills. And I strongly believe we must have habit to do assessment of what we have achieved or not!

1. 2017's Gorkhaland agitation itself created a history with such a long and continuous strike over the hills. It proved solidarity and an unshakable unity among the Gorkha community. Despite of political barriers or principles, religious and cultural barriers, we did it with strong unity among each other.

2. Participation of every level of community of Gorkha and other communities who are resides in the hills is another milestone of our agitation. Every level and every section has shown mark respect, sincerity and sacrifices (leaders are exempted) with our long-pending demand of Gorkhaland.

The above mentioned positive sides of our agitation till dates, gives more courage and strength to go forth. But unfortunately, while having assessment we must not have to be selective with good gains only, we have to accept or evaluate our failures too!

I have highlighted some of our weaknesses or setbacks during course of our agitation which I have observed closely as follows:

1. Political conspiracy and lack of legal-knowledge: As we have seen political conspiracy among hill parties, which made it easy for state government to play 'divide and rule' policy. Some of our leaders only thought about their own political benefits and played blame game among each other. We have also seen lack of legal advice to some of our political leaders on legality and how to make himself or herself clean throughout the agitation! It is necessary for a leader to make himself/herself clean-handed during agitation to lead the people's movement. Because, without leader, movement doesn't have longer life span.

Unfortunately, our leaders only trapped with illegible allegations and conspiratorial acts of state government by using government machinery and force unconstitutionally.

2. Lack of strategy: First half of our agitation (15th June to 1st of July) was very crucial. When we have got nationwide attention via national media houses, that time our hills' political parties/leaders must needed to make a solid strategy(s) to make it more effective. But due to violation and internet blackout by the state government, remained unable to highlight our movement nationwide. And our agitation slowly crippled down by the state government within our jurisdiction. Violence and damaging public and government properties made a bad impression on our agitation (we must agree with it). Due to lack of strategy during first phase only made our agitation flexible and strategically failure.

3. Lack of will-power among political leaders for demand: God knows why this agitation been started and for what purpose (s) it would be for our leaders!

Agitation remain doubtful throughout its course of movement due to lack of political will-power. Common inhabitants of the hills put all their efforts with sincerity for Gorkhaland demand but isolation of political leaders from same movement made our movements flexible and weaker day by day. Failure of GMCC, aimless agenda and strategies, repeated interference by majority party in the GMCCs' functions, lack of collective decision, irresponsible and aggressive comments and reactions by the local political leaders, lack of frontline leadership during agitation are the major setbacks of our agitation.

Now, after completing 100 days of Bandh, still we are empty handed and feeling we the people of hills are betrayed by the leaders and some of the opportunists. Many of us laid their lives, many got injured, so many stories to tell about our people's sacrifices but, still we are speechless and empty-handed.

What can we do now?

It is not over. Still we can reach to our destination. But,

1. We need to up bring educated people/leadership to lead our movement strategically with a real goal. Most importantly we need a sincere leader with our ultimate demand for the hills, nor an opportunist.

2. I must say, Gorkhaland is a long-run battle. Gorkhaland demand is a marathon nor a 500mt race. So we need long-term strategy, political diplomacy (because we have to fight this battle constitutionally in between central and state government) and visionary builder of Gorkhaland.

During last 100 days of Bandh, we have missed long course of education system. Students missed education and learning skills. Here I am not emphasizing only academic curriculum, I emphasised learning because education doesn't mean only finishing annual academic curriculum, it is beyond of that. If we do not build our future foundation of upcoming generation strong (educated) then I do not think we can even imagine a fruitful Gorkhaland for common and deprived people of the hills irrespective of castes, regions, religions and parties. Education is key to open the doors of opportunities and it can change anything. Therefore, neglecting education is great loss of ours only.

Strike only is not an effective movement or solution for Gorkhaland demand. Now we need to be constructive otherwise, after 100 days of bandh, why still our demand is pending!

Youngsters are frustrated and depressed. They already missed many.

There is a strong possibility of human trafficking and anti-social activities (some of it we have witnessed already). I myself heard following lines by saying "  I will go outside of Darjeeling, if I will get 6k salary also I will do that." "wish I could get job somewhere out of Darjeeling...."  "....Nothing is here, my future is dark."

These are not wishes, if we ponder on it sincerely, we will find a big compulsion, which makes them away not only from movement but away from the hills itself. I think this is one of the big failure of our leaders that they are unable to connect youngsters with ongoing movement of Gorkhaland. Youngsters are tired with filthy and opportunist politics played shamelessly over the hills.

Now, let us unite as before, lets impart a new vision and awareness among the common people of the hills, about our demand and destination. Need to spread value of awareness of demand among upcoming new generation too, because they are the ones who lead us in future. And lastly, let us make our Gorkhaland on the safe hands of educated, skilled, honest, empowered and able leaders of the hills.

Then our martyrs of Gorkhaland, who laid their precious lives for it, will smile and take rest peacefully!

"We shall overcome one day!" 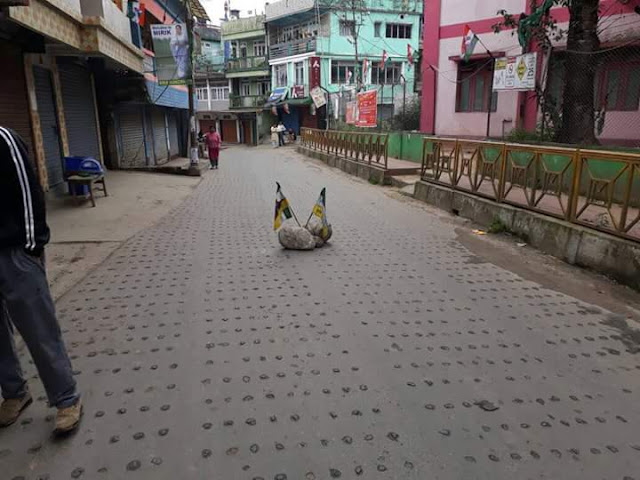