Bengal, once one of the leading lights of India – where thinkers, philosophers, scholars, reformers and revolutionaries of all hue and colour found acceptance and thrived. The land of Raja Rammohan Roy, Ramkrishna Parmahansa, Swamy Vivekananda, Gurudev Rabindranath Tagore, Netaji Subash Chandra Bose, Amartya Sen; the land of which it was once said, “what Bengal thinks today, India thinks tomorrow.’

Today, I honestly shudder to think, what if, our nation starts to think like Bengal tomorrow? I fervently hope, our nation doesn’t.

The land of revolutionaries like Charu Mazumdar today arrests people over inane Facebook posts that TMC cadres find offensive, the land of Raja Rammohan Roy arrests Professors for sharing a cartoon, the land of Gurudev Rabindranath Tagore shuts down a Nepali language TV channel because of the comments made by its viewers online, the land of Netaji hounds out everyone who are fighting for their rights as enshrined in the constitution of our nation, the land of Amartya Sen files cases against journalists for writing the truth, and most tragic of all, the land of Swami Vivekananda which allows for such distortions of a festival – Durga Puja -  so sacred and dear to us all, despite our religious affiliations.

In Bengal today, a rape in the heart of Kolkata city is discarded as ‘sajaano ghotona – staged event’, the Chief Minister offers ‘picchone baas – bamboo in the backside’ to her detractors, a mentally ill woman Otera Bibi is paraded nude, slapped and kicked, and lynched by the “intellectual” public to death, and 24X7 news channels help spew lies and fabricated truths.

I shudder to think, what will become of India and her people – if we all start thinking like Bengal today?

The level of political discourse has fallen so low in Bengal, that if Kolkata 24X7 portal is to be believed, today a Transport Minister designs a Durga Puja pandal showing TMC Chief Mamata Banerjee as Maa Durga, and the leader of Gorkhaland movement Bimal Gurung as a Demon.

I don’t honestly mind how you portray Bimal Gurung, but Mamata is no Durga, and I take offense to any such portrayal.

Imagine if someone portrayed Mamata as a Demon, how would the powers that be, in Bengal react? Would they tolerate any such portrayal?

But, it’s ok… because the one being portrayed as a Demon is despised and hated by everyone in Bengal – for he dared to lead a movement seeking a separate state of Gorkhaland. This does make him a fair game and the people he represents to be Demonized. TMC stalwarts must take pride in how well they have managed to promote ‘Freedom of Expression’ in Bengal.

A close friend of mine from Kolkata asked me recently, if I rued the leader we had?

I said “Yes ! I wished we had a different Chief Minister.” 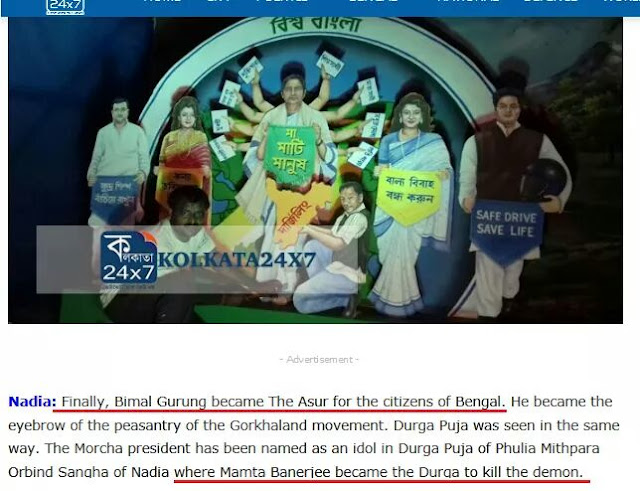