Gangtok: Former Indian soccer star Bhaichung Bhutia has broken his silence on his resignation from Trinamul last month, accusing a section of party leaders of treating him like an "outsider" while signalling a political career in home state Sikkim.

"Since I was an outsider (in Bengal), I was opposed not just by the public but even by people in my own party," Bhaichung told The Telegraph on Wednesday, weeks after he had announced his resignation through a tweet.

Trinamul leaders declined comment but sources in the party claimed Bhaichung was trying to cosy up to the BJP to start his innings in Sikkim, where he is now on a Yuva Yatra (youth march) with some friends "to understand the ground reality". 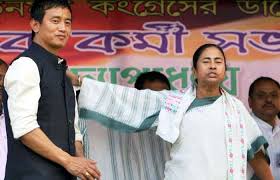 "All that we get to hear is not reflected on the ground. There are good and bad things happening. We want to see the place, meet people and know the reality," Bhaichung said. Bhaichung said he would take a call on formally joining Sikkim politics before Assembly elections that would coincide with Lok Sabha polls next year. But options are limited for Bhaichung in his home state, where the ruling Sikkim Democratic Front is a member of the North-East Democratic Alliance, formed as a part of the BJP's "Congress-Mukt Northeast".

"People like Bhaichung, who make lateral entry into politics, normally join the ruling party... It is sad that he is complaining about Trinamul. The party gave him a lot of respect," said a Trinamul leader.

Trinamul nominated Bhaichung from the Darjeeling parliamentary seat in 2014 but he lost to the Gorkha Janmukti Morcha-backed BJP candidate S.S. Ahluwalia. Mamata Banerjee fielded him against CPM veteran Asok Bhattacharya in Siliguri in the 2016 Assembly polls, but he lost. Later, In June 2016, Bhaichung was made chairman of the North Bengal Board for Development of Sports.

"Bhaichung, was not very visible in Siliguri since the end of 2016. Finally, in February this year, he walked out of the party," said a Trinamul source.

On Wednesday, Bhaichung said "the lessons he learnt in Bengal" would hold him in good stead. Unlike in Bengal, where he was "thrown down from the top", he said he would work his way up from the bottom in his home state.