GUWAHATI: Assam government will set up a cultural research centre for Gorkha the city and a plot of land will be provided where in statues of three legendary figures of Gorkha community will be installed. It was announced by chief minister Sarbananda Sonowal on Wednesday.

Meeting a delegation, representing three Gorkha community in Assam Legislative Assembly here Sonowal said, “Gorkhas are an integral part of the larger demographic profile of Assam and together they have contributed immensely to strengthen socio-cultural fabric of the state”. 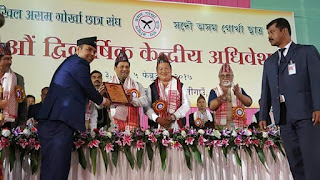 In recognition to immense role of the people belonging to Gorkha community, Government of Assam will set up Cultural Research Centre for Gorkha. Moreover, steps will be taken to install the statues of three Gorkha legendary personalities namely Chabilal Upadhaya, Bhakta Bahadur Pradhan and Dalbir Singh Lohar in recognition to role in strengthening the demographic diversities of the state.

Members of three organisations representing Gorkha community namely Asom Nepali Sahitya Sabha, Gorkha Students’ Union and Asom Gorkha Sammelan held a meeting with the Chief Minister and apprised him of different problems that the people of Gorkha community are confronting with. Chief Minister Sonowal while lending a patient hearing, assured the delegation of taking tangible steps to solve the problems of Gorkha people who are approximately 25 lakh in the state.

Sonowal also met a delegation of All Assam Bengali Youth Students’ Federation in Assam Legislative Assembly and assured the delegation of taking appropriate steps for resolving various issues raised by the delegation. He also said that the state government will extend best possible steps to the people belonging to Bengali community for their socio-economic and cultural development. With regard to the alleged encumbrances related to NRC issue, Sonowal assured the delegation to take up the matter to NRC Coordinator to remove all bottlenecks. The seven-member delegation led by its advisor Sukumar Biswas also submitted a memorandum to the Chief Minister. Sonowal while acknowledging the role played by the people belonging to Bengali community for the socio-cultural-economic and educational development of Assam vowed to do everything possible for the development of all sections of the people of the state belonging to Barak, Brahmaputra, hills and plains.