Home > History > How Indian Gorkhas came with their land

How Indian Gorkhas came with their land

In an attempt to put into perspective the history of Indian Ghorkhas for the benefit of all  of us  residing in various parts of India here is an excerpt adapted and abridged from Salil Gewali's article on Indian Ghorkhas which is as follows :-

It is quite apparent that West Bengal is steadily eyeing Darjeeling and its adjoining areas as it's private fiefdom.  It seems a bunch of good scholars are now urgently required to wise  up to history. The West Bengal government probably does not know about the fact that the Nepal Kingdom in 1815-16  under the Treaty of Sugauli was prudent enough to come to an agreement with the then rapaciously imperialist ‘East India Company’. So, “Nepal Kingdom’’,  in order to  avoid continuous unpleasant conflicts, surrendered about one-fourth of its land to the British.  This "surrendered land'' included the major chunk of the mountainous, hilly and plain terrains of areas like Darjeeling, Sikkim, Nainital, Kumaon, and Garhwal which was handed over to the East India Company. Rationally speaking, if all this vast area of land, its mountains, its pristine hills, rivers, flora and fauna can be regarded as Indian then why can’t the human inhabitants who lived therein ?? Why is there so much skepticism and callousness? Well, if our nation's leaders are still confused and desist from resolving the identity crises of the Ghorkha natives of this land then they should  meet and consult the bio-scientists and geoscientists. It's utterly regrettable to see Ghorkhas treated so poorly in their own land...

Hence The Gorkhas came with their land, not  like other invaders or infiltrators who have been posing serious threats to the NATION. Gorkhas are the stout walls of security and integrity for the country. It is time for The Indian government to pay back their dues and enough of it with gratitude. They can’t be expected to bite the bullet all the time under oppressive and exploitative regimes

Abridged  and adapted from an excerpt from the writer

(A Shillong-based writer and researcher who has to his credit a landmark publication of his research-based book of over 25 years entitled ‘Great minds on India?’ which has earned worldwide appreciations. Translated into eleven languages his ‘Great Minds on India’ has recently been prefaced by a world-acclaimed NASA Chief scientist – Dr. Kamlesh Lulla of Houston. 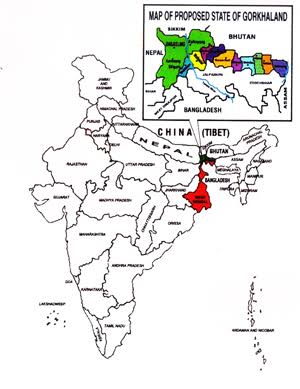