Bimal Gurung on suspicious movement of Rohingyas in the region

The Darjeeling, Terai and Duars touches three international boundaries - Bhutan, Nepal, Bangladesh, and Tibet (China) is also located right above our region. Given which the significance and importance of this highly sensitive and strategic border area, that connects the Indian mainland to the rest of North East India, cannot be overstated.

Of late, I have been hearing ground reports from our cadres about suspicious movements of new people in our region, many of whom reportedly do not even speak Hindi, and they fear that these people are Rohingyas who are now being gradually pushed into our region with the intention of diluting the existing Gorkha, Adivasi, Rajbonshi and Indian Bengali population. It seems like sinister plans are afoot to further marginalize the original inhabitants of these land, and render us homeless.

It has been widely acknowledged that Rohingyas pose a national security threat, and it seems like certain political elements are allowing them to settle here for one and only reason - 'vote-bank' politics. Despite the central intelligence agencies having repeatedly raised the national security risk posed by Rohingyas, some political outfits are allowing politics of votes to supersede national interests.

I am hopeful that the Honourable Prime Minister and Union Home Minister will kindly take cognizance of the situation developing in our region, and do the needful to put an end to these sinister designs.

I request everyone living in our region to kindly remain vigilante and report all such suspicious settlements that may be coming up near you. 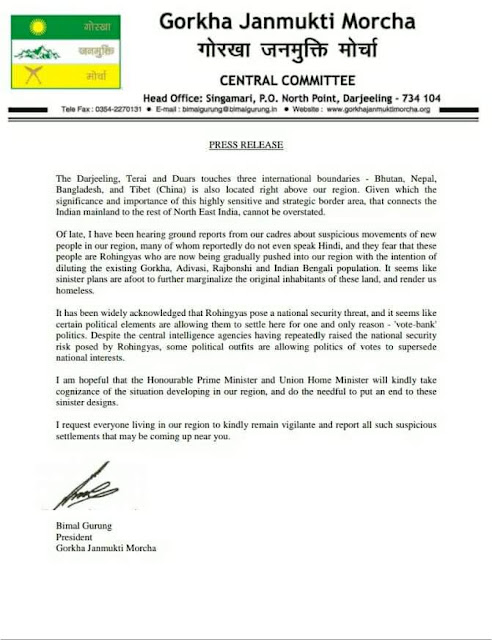