Gorkha National Liberation Front president Mann Ghisingh on Thursday said he would soon write to the state government, demanding non-political person to be appointed as the head of the Gorkhaland Territorial Administration (GTA).

The party said that the Hill body was being presently run in a “biased manner.” Mr Ghising was speaking during an event to mark the 38th foundation day of the party, which they call the ‘Gorkhaland Namikaran Diwas,’ at a community hall at Lumthang at Happy Valley here.
Mr Ghisingh was said that they would write to the Election Commission, seeking panchayat elections in the Hills, even if it is for a single tier.

“Until the problems of the Hills are solved and a permanent solution comes forward, a neutral person with no political affiliation should be at the GTA helm. We are hearing a lot of complaints that the GTA is running in a biased manner and is one-sided. If a neutral person is appointed, he/she would listen to all sides. If this is not done in the coming days, there could be unrest in the hills. The situation here has finally normalised and the same thing should not be repeated, so we want a government person to run the body. We will soon send a letter to the state regarding this,” Mr Ghisingh said.

There could be a different strategy.” “We have to keep good relationships with the state government and move forward. But it should not be like, we sit when they ask us to, and stand up when they wish so. The GNLF is not like that, and till now, I have not bowed down my head for anyone. Even if my nature is that of a soft spoken person, I will only bow down my head for the one who has taught me to keep it high. I request leaders here not to threaten me, as we are not afraid, but just do not want this area to be disturbed,” he added. 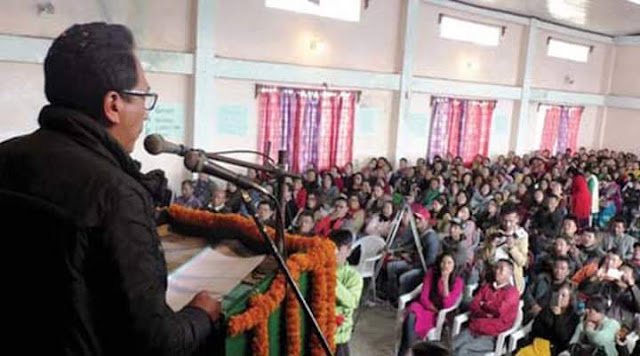