REMEMBERING THE MARTYRS OF GORKHALAND AGITATION

REMEMBERING THE MARTYRS: "I regret that I have only one son to sacrifice for Gorkhaland" - The Gorkha Mother

Every time a gust of smoke comes out of the barrel of a gun, its ominous sound, floating with the clouds, worried hearts beat faster, but somewhere, the heart of a mother bleeds to death. How must it feel for her, when her son who had promised to come back in the evening from the rally, returned home instead with a crown of bullets on his head. The sight of her son's body being brought home on four shoulders gives her great pain, much greater than the pain she felt during his birth.
She dies a thousand times feeling her son's cold body.

All the memories of the past, accomplishments of the present and hopes of the future, lay wrapped in the white cloth that covered his face. Like every mother, she had hoped that her son would be by her side, taking care of her when her age old limbs confined her to bed, that he would carry her to Sinchel Dham, when she was not able to walk in her last days. Now as the rolling mist came down and hid the town, the roaring sounds of "Jai Gorkha! Jai Gorkhaland!" reverberated across the valley, she could see in the moonbeams his silver hands and silver eyes. Just last night, the mother and son had sat together on the verandah, talking about their plans for celebration of what would be the most joyful day of their lives - the formation of Gorkhaland. But sadly, life had different plans for them.

During the 80s, he had seen his father climb the hill at the back of their house, every evening as the light fell short, and take shelter in the jungle along with others. He could not understand why his father had to leave the house and he asked his mother every day. Then when the CRPF raided his house in search of his father, he had found his answer. Even then, as a child, he had tried to express his anger by throwing stones at the raiding party as they were leaving, and his mother had run to stop him. As she sat beside him, gently cleaning the blood off his face, all these memories passed through her mind.

Now a large crowd was gathering in her house. They spilled across the verandah and into the road below and beyond. People of all ages, caste and creed, irrespective of their religion and status, had come to bid her son farewell, and to catch a glimpse of the fallen hero. 'Who were these people who had gathered here?' She wondered. 'Where had they come from'. And in that painful moment, her heart swelled with pride, and she was released from the agony of losing her only son. She consoled herself that he had given up his life for a great cause, and in this she found renewed courage and strength. Suddenly she felt a great sense of hurriedness crop in her, an urgency to get over with the rituals quickly - 'There are more sons who have died, and these people must go and console their mothers too' She said to herself.  As she kissed him on his forehead for one last time, she promised him that his sacrifice would not go in vain.

As the mist followed the crowd to the burial place, the cries of 'Jai Gorkha! Jai Gorkhaland!! Long live our Shahid (Martyr)!!' could be heard from every nook and corner of the town. People followed with their khadas and respect for the shahid, every lip carrying a prayer for him. There was not a dry eye in the crowd, as the flames engulfed his body. She looked around at the countless unknown faces in the crowd, brought together only by the cause her son died for, and right at that moment her heart found resounding assurance and she felt a surge of energy within her. She knew the fight would go on.

The mother stood in the corner, amidst the mass of people and murmured to herself  "I regret that I have only one son to sacrifice for Gorkhaland". 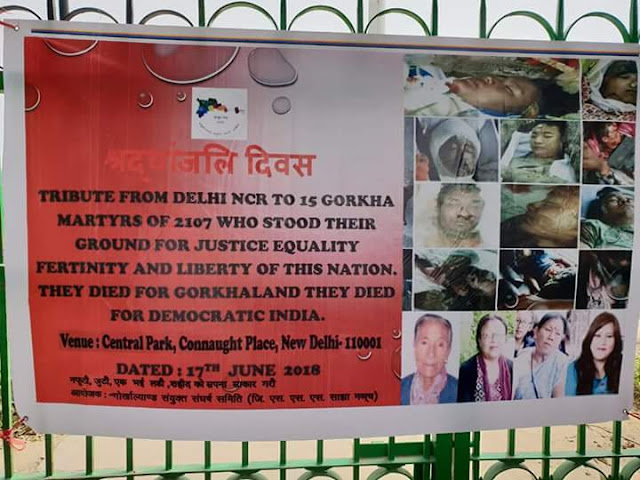