Bikash was a Gorkha Jawan From Manipur.

In the exchange of fire, Rifleman Bikas Gurung of 2/1 Gorka Rifles was grievously injured and succumbed to injuries. The 21-year-old soldier belonged to Khunka Khuki village of Manipur, and is survived by his mother.

May his soul rest in peace and may God give strength and courage to his family and friends. 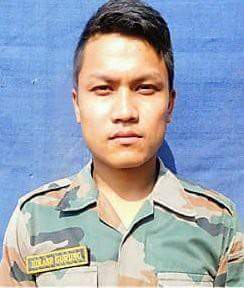